The catastrophic collapse of the Arecibo telescope on 1 December 2020 was captured by a control tower camera and a drone.

Take a look at the just-released footage, and find out what it showed!

The Arecibo Telescope is a 305 meter wide radio telescope, with a steerable receiver hanging 150 meters over the spherical reflector dish.

Built over a natural sinkhole, it was completed in November 1963 and was the world’s largest single-aperture telescope for 53 years.

Culturally, the Arecibo Telescope is famous for the SETI (Search for Extraterrestrial Intelligence) program, and being featured in the 1995 James Bond film, Goldeneye; and the 1997 sci-fi film, Contact. Scientifically, the Arecibo Telescope allowed for numerous discoveries in astronomy :

The Arecibo Telescope was damaged by hurricanes and storms over the years, as well as budget cuts.

The end came when an auxiliary support cable for the hanging platform broke on 10 August 2020, causing a 30 metre gash in the reflector dish. 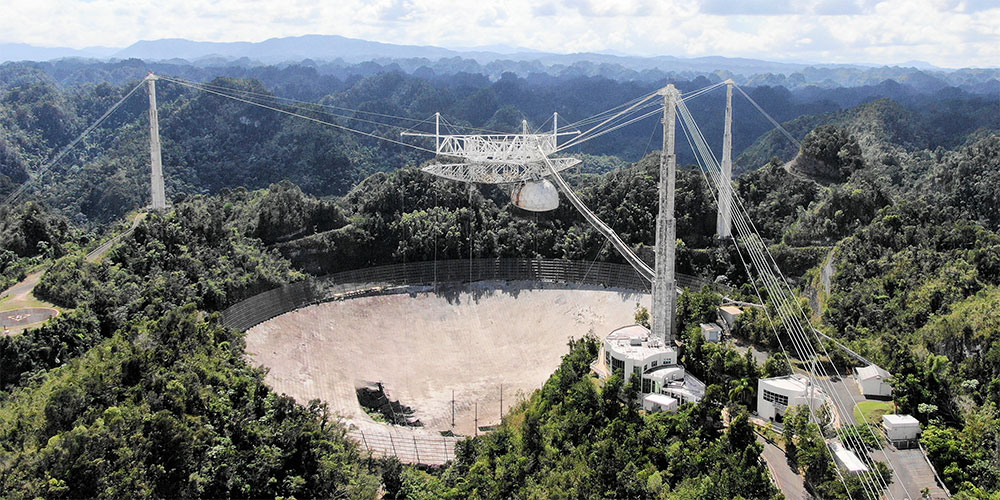 Before a new cable could be installed, one of the two main support cables broke on 7 November 2020, shattering part of the dish.

On 17 November 2020, the National Science Foundation announced that it was impossible to repair the Arecibo telescope, and it will be recommissioned instead.

Unfortunately, before that could happen, the remaining support cables failed, and the hanging platform collapsed into the dish on 1 December 2020.

Watch : Arecibo Telescope Before & During The Collapse!

The National Science Foundation just released footage of the Arecibo telescope, before and during the collapse.

The footage was captured by a video camera from the control tower (Tower 12), and a drone inspecting the cables at the top of Tower 4.

Here is how the National Science Foundation described the footage of the collapse :

This video, that starts with a view of the top of Tower 4, was taken from the vantage point of an Arecibo Observatory drone, utilized for monitoring the condition of Tower 4 support cables.

Four cables are seen in the center of this video. The top cable does not support the telescope platform, but instead supports the catwalk described in the narrative for the previous video. The three lower cables are, from left to right, M4-1, M4-2, and M4-3.

The first indication of the coming failure is the breaking of another M4-2 wire, accompanied by a puff of “smoke” and chips of paint flying away from the surface of the cable. Four seconds later the entire M4-2 cable appears to disintegrate.

The drone operator then swings the drone around to view the reflector dish and fallen platform, azimuth arm, Gregorian dome and the falling cables and catwalk.

The top section of Tower 12, near the Visitor Center, can be seen tumbling down the hill to the left of the operations building. The Tower 12 backstay cables that connect the top of Tower 12 to the ground cause damage behind Tower 12, well away from the edge of the telescope dish.

According to the NSF’s initial findings, the top section of all three support towers broke off, and both the 900-ton hanging instrument platform and its support cables fell onto the dish.

The observatory’s learning center sustained significant damage from the falling cables, although fortunately, no one was injured in the incident.

This is what the Arecibo telescope looked like, after the hanging platform crashed into the reflector dish below. 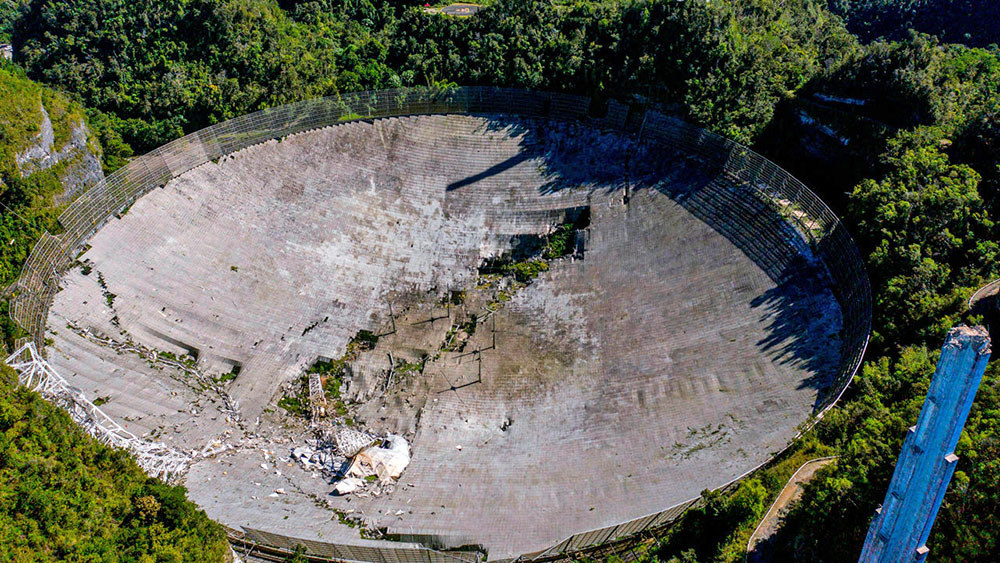