We tested in both Windows 7 and Windows Vista, with the latest updates. We chose to use IO Meter 2008 as well as our “old faithful”, WinBench 99 2.0, with the following tests :

Business Disk WinMark 99 is a real-world simulation based on three office application suites – Microsoft Office 97, Lotus SmartSuite and Corel WordPerfect Suite 8, as well as a web browser, Netscape Navigator. They are quite dated, but should still reflect the usage patterns of users in an office environment using such applications. The test runs through a script that keeps multiple applications open, while it performs tasks that switches between those applications and Netscape Navigator. The result is the average transfer rate during the script run.

High-End Disk WinMark 99 is a real-world simulation based on AVS/Express 3.4, FrontPage 98, MicroStation SE, Photoshop 4.0, Premiere 4.2, Sound Forge 4.0 and Visual C++ 5.0. However, it differs by running the applications serially, instead of simultaneously. There are individual results for each application but in this comparison, we will be looking only at the weighted average score, which is the average transfer rate during the tests.

Unfortunately, WinBench 99 is not fully compatible with Microsoft Windows 7, registering a SetFilePointer error in the Disk Access Time test. So, we were not able to obtain any Disk Access Time results.

In addition, it would keep crashing if the hard drive was tested with a single partition. This is likely due to a limit on the size of the partition that is supported by WinBench 99. We came up with a workaround by dividing the hard disk drive into 5 partitions of equal sizes. We then tested each partition individually and averaged the results.

The WD Gold 8TB datacenter drive has an official formatted capacity of 8,001,563,222,016 bytes. We checked that out by formatting it in NTFS using Microsoft Windows 7. 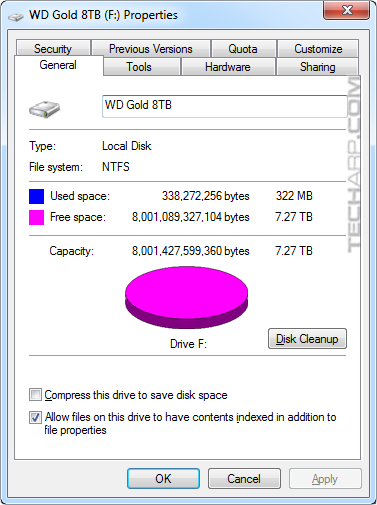 The actual formatted capacity was 8,001,427,599,360 bytes, which is about 136 MB lower than the official storage capacity. With about 338 MB allocated to the NTFS file system, the actual usable capacity remained slightly above 8 TB.

As expected from a premium, datacenter-grade hard disk drive, the platter profile of the WD Gold 8TB datacenter drive was phenomenal. There were absolutely zero dips in throughput that would signify a significant use of replacement sectors. Lots of them would be evidence of poor platter quality. 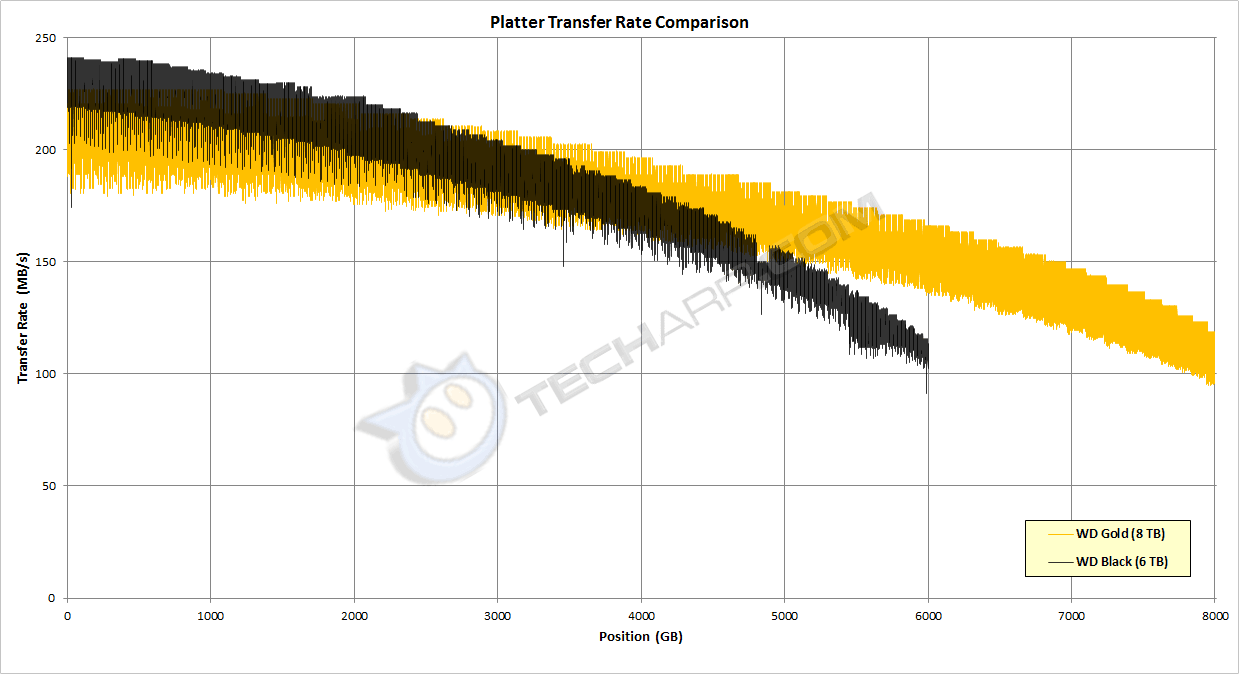 We also compared its platter profile to that of the 6TB WD Black – Western Digital’s top-of-the-line desktop hard disk drive. We can see that the denser platters allow the 6TB WD Black to achieve a higher throughput initially, but the 8TB WD Gold equalised it at around the 3.5TB point.

We monitored the surface temperature of seven hard disk drives during their benchmarks. The following chart shows their operating temperature range, from idle to maximum load. Please note that instead of giving you the absolute numbers, we are showing the temperature delta, which is the difference between the actual temperature and the ambient room temperature. 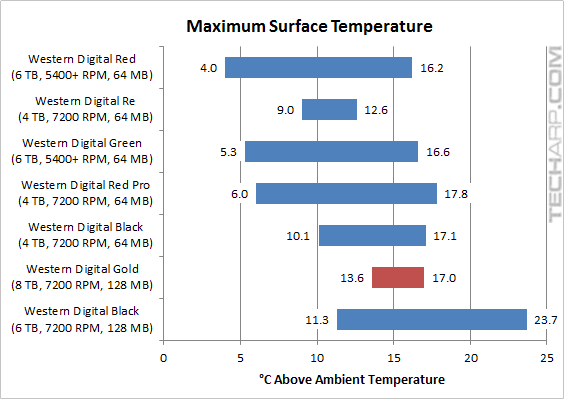 Despite packing 2 additional platters than the 6TB WD Black, the 8TB WD Gold drive was significantly cooler at full load. In fact, it ran cooler than the 4 TB WD Black Gen. 2, and the 4 TB WD Red Pro drives!

This reduced thermal output (and power consumption) is a key advantage of helium-filled hard disk drives like the 8TB WD Gold drive. When deployed in the hundreds or thousands in a datacenter, the lower energy costs of running them, and keeping them cool, will be very significant.