We took the Samsung Galaxy Note 10+ for a photography trip to Macau, where we took the opportunity to test it out at the Golden Reel at night!

Check out these Galaxy Note 10+ sample photos which will show you what you can expect from the Golden Reel at night! 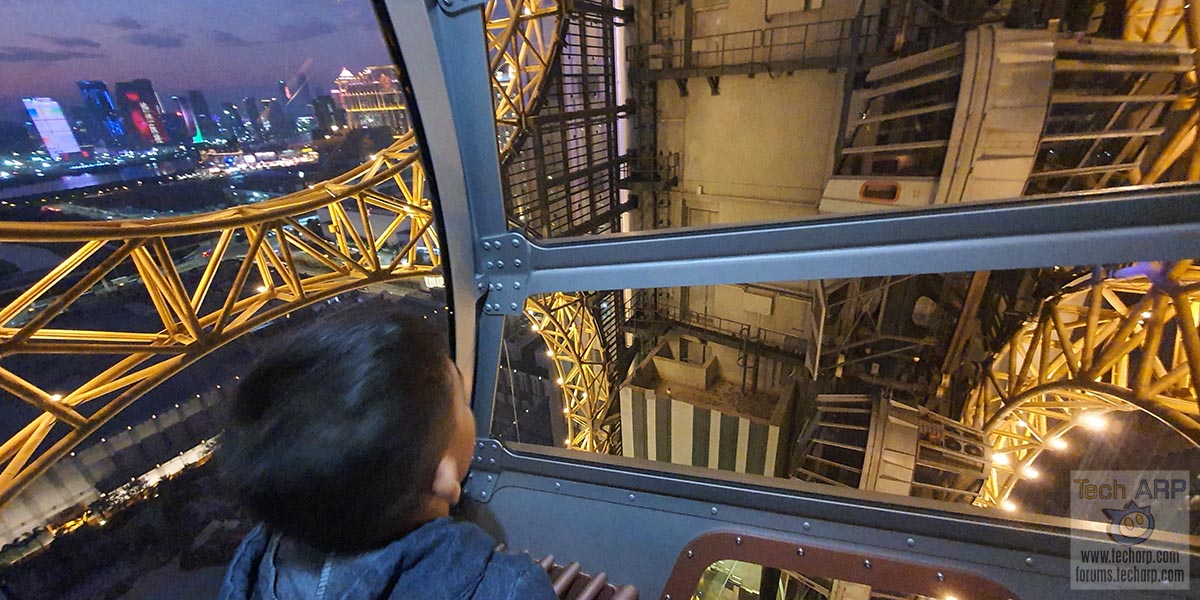 The Galaxy Note 10+ is the latest Samsung Note device. Think of it as an improved Galaxy S10+, with an S Pen stylus!

In addition to a flagship-class processor and a ton of memory and storage, the Samsung Galaxy Note 10+ (US | UK | AU | SG | MY) boasts a quad-camera system.

The 3D DepthVision camera is actually a pair of ToF (Time of Flight) emitter and sensor that provide 3D data to the main camera for features like Video Bokeh and 3D scanning. It doesn’t take any photos.

Macau’s Golden Reel, the centrepiece attraction of Studio City, opened in October 2015. Towering 130 metres (427 feet) off the ground between the two Studio City towers, it is the highest Ferris wheel in Asia, and the world’s first to feature a figure-eight design.

Although everyone believes that the figure-eight design was an obvious nod to the Chinese belief that the number 8 brings good luck, Melco Crown (which runs Studio City) claims that it is based on “an epic Hollywood-inspired tale of two asteroids careering through Studio City’s two Art Deco hotel towers” 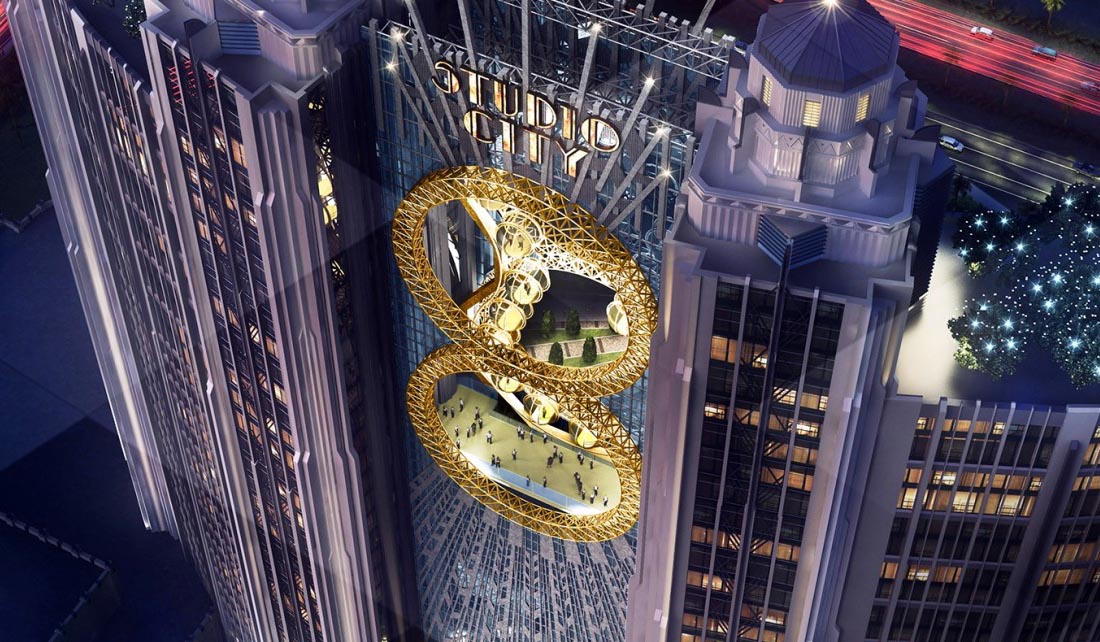 Golden Reel : Getting There

Then you need to head up to the third floor to purchase your ticket, and ride up to the 23rd floor to hop into one of the Golden Reel’s 17 Steampunk-inspired cabins. People may call Macau the Las Vegas of the East, but the Cotai Strip is still not as extravagantly built-up as Las Vegas. So the best time to view is :

As we did in our Senado Square night photography session, we used only the Auto mode, with no manual adjustments – because this is precisely how the vast majority of smartphone users take their photos!

And in case you are wondering, the Golden Wheel cabin does not actually go in a figure eight. It’s like two semi-circular Ferris wheels combined. 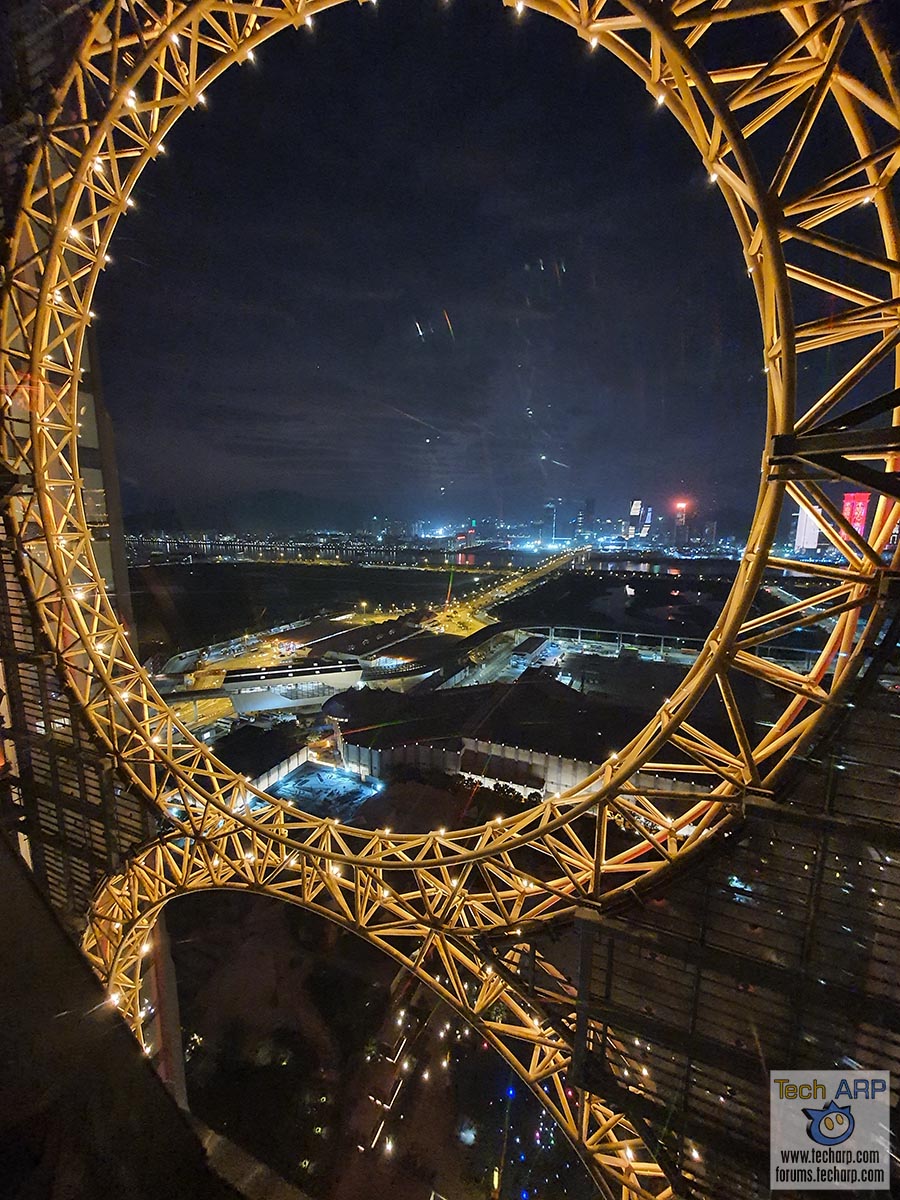 As the cabin lights are turned off once it leaves the platform, the Samsung Galaxy Note 10+ (US | UK | AU | SG | MY) does a pretty good job of capturing the scenery with minimal reflections off the windows and glass floor.

Just make sure you don’t use any flash because it will not only blind your subjects, it will turn out really badly in your photos. 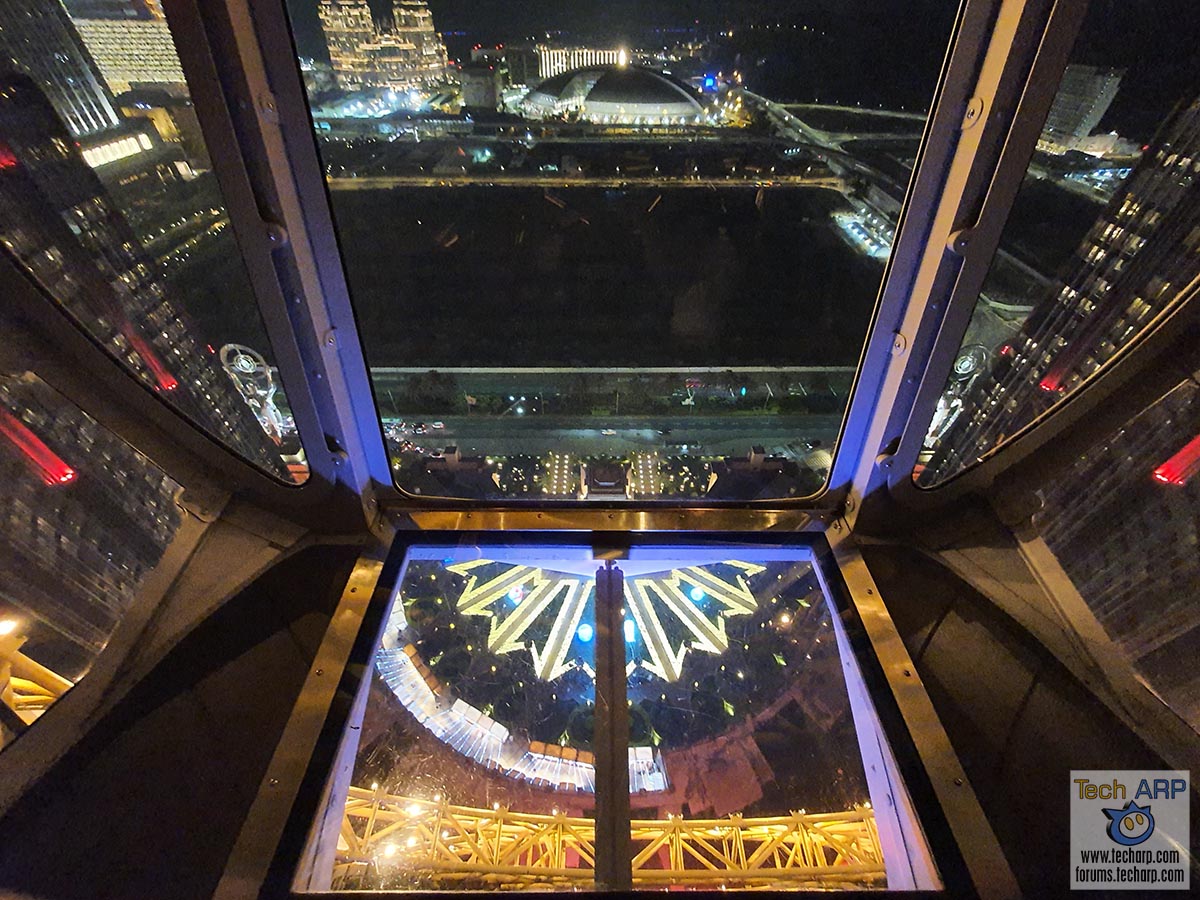 As long as you are focusing on the brightly-lit scenery below, you should be able to take some nice photos. The cabin moves rather slowly, so you won’t get too many blurry shots. 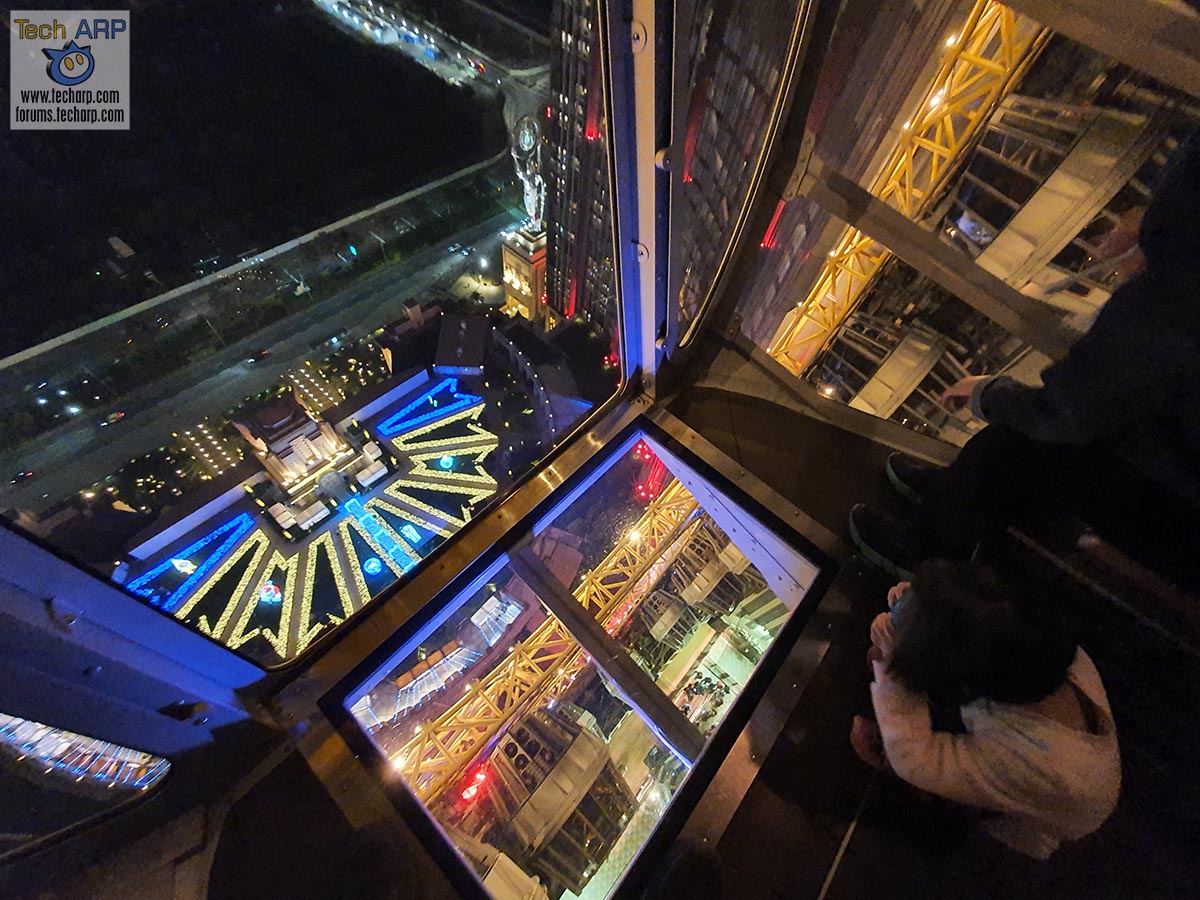 But it’s still way too dark inside the cabin to take good shots with the Samsung Galaxy Note 10+ (US | UK | AU | SG | MY). And you should NOT use your smartphone’s flash.

Instead, use an LED video camera light or another smartphone’s torchlight feature, to cast enough light on the subjects and not drown out the background. 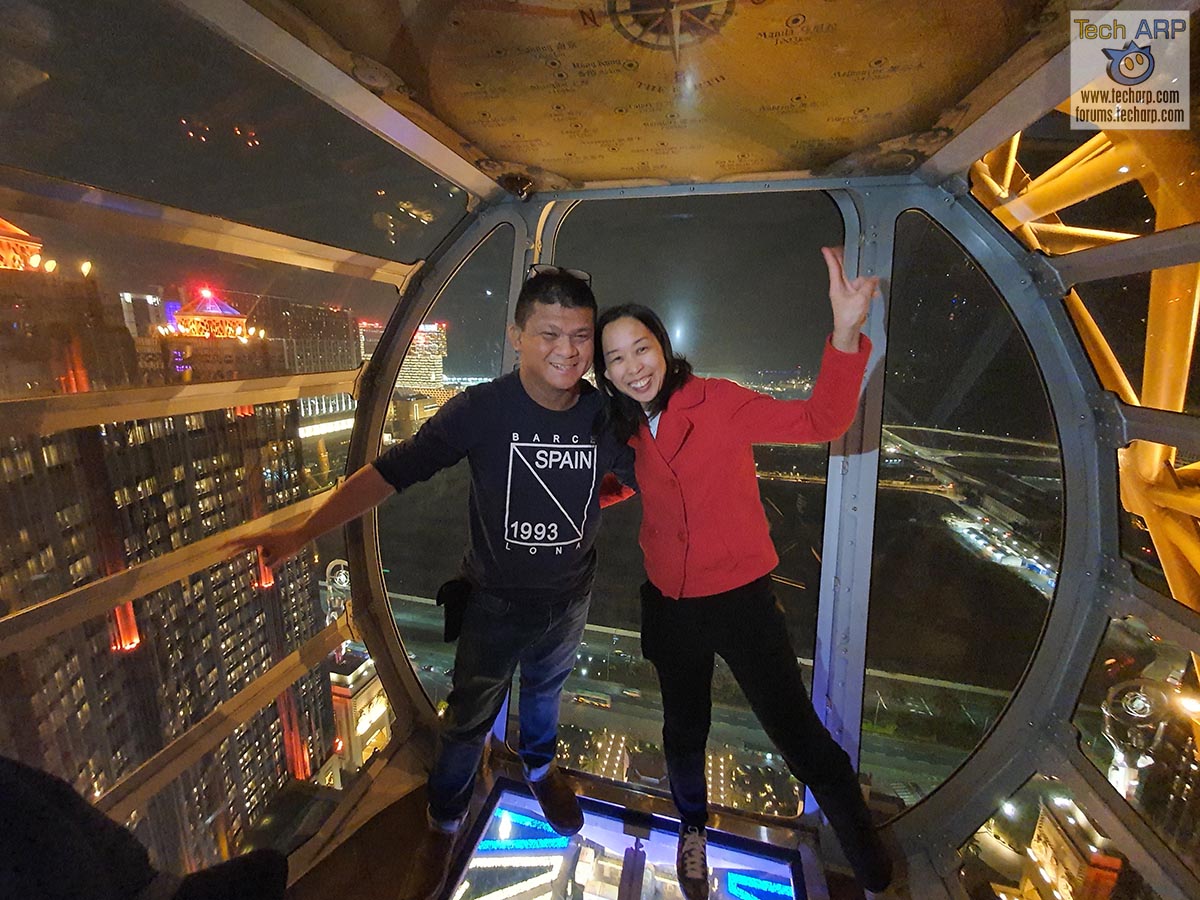 Generally, you will want to hold the LED light / other smartphone high above your head so that the light casts downwards at your subjects.

This will help prevent the light from reflecting off the glass in the back, which you can see in the picture above but not this one below. You can also try bouncing the light off the low ceiling, for a more subtle glow. 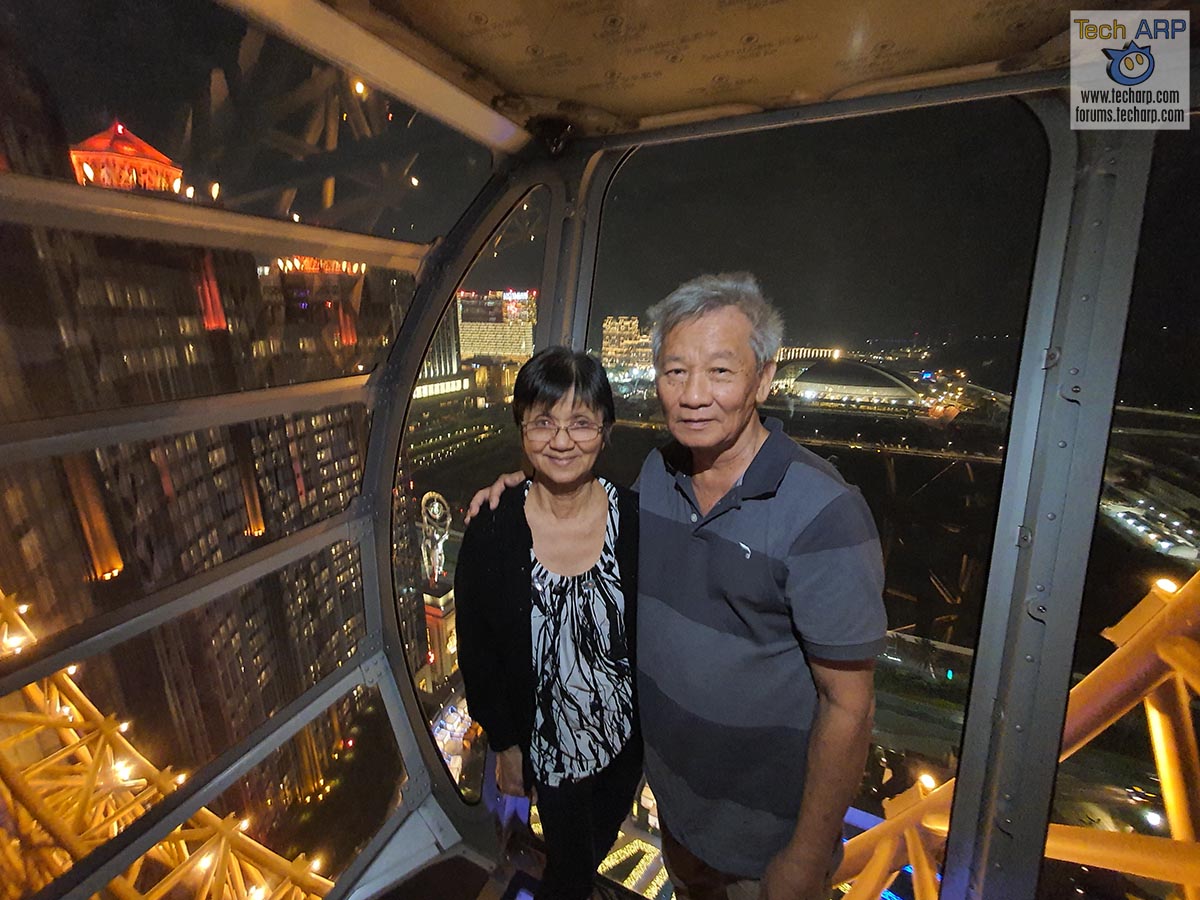 For most people, the Golden Reel will be just something to check off the list while visiting Macau. It offers a nice view of the Cotai Strip at night, but I doubt people will want to revisit it.

But if you are there in a group, we highly recommend taking the Private Cabin option, because it buys you time and four rounds of this Ferris wheel to take some nice photos.

Just remember to use a source of extra lighting when taking photos inside the cabin. This will ensure that the faces of your subjects will be well-lit, without blow out the background.

Here are the online purchase options in various countries :