With the new Screen off memo function, users do not need to launch the memo app to jot down a reminder or a to-do list. Instead, they can conveniently use the phone’s S Pen to write a note directly on the Galaxy Note7’s off screen. When the Always On Display made its debut with the Galaxy S7 and S7 edge earlier this year, it gave users continuous access to important information such as the time, date and missed calls. But with the Galaxy Note7, Samsung is taking things even further by expanding the amount of information that can be displayed.

Now, on top of missed calls and messages, users can also check their calendar for events and view notifications from various apps. For example, they can get song information from music apps. 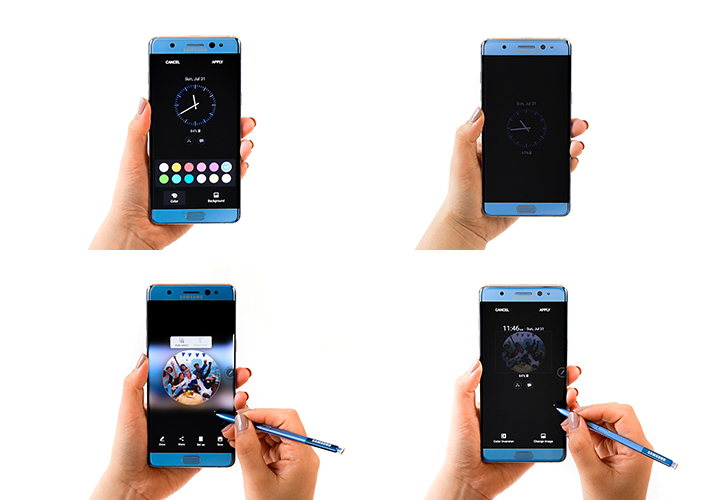 In addition, with the new Direct Access feature, users can easily react to notifications and automatically launch an app or the music player by simply double tapping the notification that is displayed. This makes it possible for users to quickly reply to messages, edit calendar information or pause a song. Direct Access not only adds convenience, it also saves users valuable time.

In addition to offering superior convenience, the Always On Display provides a variety of personalization options, making the Galaxy Note7 as unique as its user.

Although the Always On Display continuously displays key information, it is power efficient, using less than 1 percent of battery per hour.

With the Super AMOLED display on the Galaxy Note7, the black pixels completely shut off, enabling the Always On Display capability. Also, Samsung was able to decrease the power consumption of the display’s related components, such as the Display Driver IC (DDI), which consumes the most power, the Application Processor (AP) and other various sensors.

To further improve performance of the DDI, Samsung separated the power usage process into two modes – the normal mode and Always On Display mode – by applying the Smart Power Saving hardware algorithm, reducing power consumption even when the display is in sleep mode.

In addition, the Always On Display automatically turns off when the phone’s battery goes below 5 percent, or when the user activates the Night Clock, which is located on the device’s edge display.