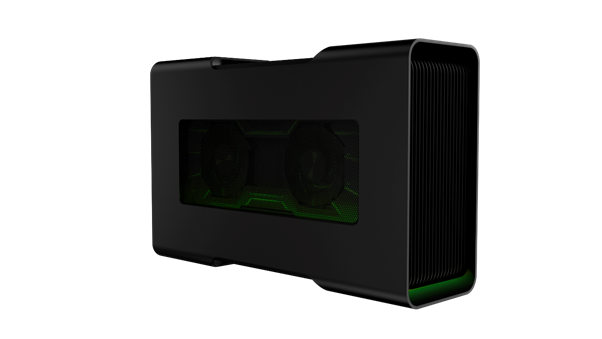 “Razer continues to innovate in the laptops category where big systems brands either cannot or will not,” says Min-Liang Tan, Razer co-founder and CEO. “This time, in collaboration with industry leaders, we’ve created the world’s first external graphics card solution of its kind, bringing the GPU power of a desktop PC to the latest Razer laptops, such as the Razer Blade Stealth Ultrabook, through a single Thunderbolt™ 3 connection with plug-and-play convenience.”

“All consumers, non-gamers and gamers alike, now can easily migrate from their Razer laptop for on-the-go performance to driving a full desktop experience using Razer Core, including enhanced graphics and simple connectivity to peripherals.”

The graphics enclosure supports a single double-wide, full-length, PCI-Express x16 graphics card. Qualified AMD Radeon graphics cards are available for use with the Razer Core. At launch of the Razer Core, NVIDIA will support GeForce GTX GPUs, including the entire lineup of Maxwell GPUs, such as the best-selling GTX 970. The Razer Core will be compatible with Razer’s latest systems including the Blade Stealth Ultrabook, and the new Razer Blade 14-inch gaming laptop in the near future.

The Razer Core will be available for pre-order starting today and will ship starting in April. The MSRP for Razer Core is $399 with the purchase of a compatible Razer notebook or $499 if purchased separately. Current registered owners of the Blade Stealth will receive the discounted price.

A single Thunderbolt 3 (USB-C) cable provides ample bandwidth and is all it takes to connect compatible Razer systems with the Razer Core. With the Razer Blade Stealth, the Razer Core also provides power to the notebook, charging the internal battery. Whether a laptop user is interested in gaming or editing 4K video with external desktop graphics performance, Thunderbolt™ 3 is the all-in-one connection that can make it possible with select Razer systems like the Blade Stealth and Razer Core.

“Thunderbolt 3 brings Thunderbolt to USB-C at speeds up to 40 Gbps, creating one compact port that does it all,” said Jason Ziller, director of Thunderbolt Marketing, Intel. “Thanks to technical collaboration between Intel, Razer and the Radeon™ Technologies group at AMD, Razer Core is the first plug-and-play external graphics solution that transforms the Razer Blade Stealth Ultrabook into a desktop-like gaming experience”

The Razer Blade Stealth and Razer Core are the first products to ship that support AMD XConnect™ technology, which when configured with a qualified Radeon graphics card ensures seamless switching between discrete and integrated Intel HD graphics for a true plug-and-play user experience.

“We believe powerful external GPUs are thrilling for gamers that have longed to connect serious gaming performance to an ultrathin notebook,” said Ravi Gananathan, Director, MNC Graphics, AMD. “With the advent of AMD XConnect technology, that dream is a simple and intuitive reality. Together, the Razer Core and AMD XConnect for Radeon graphics are the ultimate intersection of performance, simplicity and design.”

Physical installation of a graphics card into the Razer Core requires no tools. Its durable aluminum housing slides open elegantly, and a single included thumb-screw secures the graphics card in place. Razer’s solution helps future-proof systems, as graphics cards are easily swappable as new components become available. Traditional laptop designs with fixed internal processors could not easily allow for upgrading graphics capabilities over time, if at all. 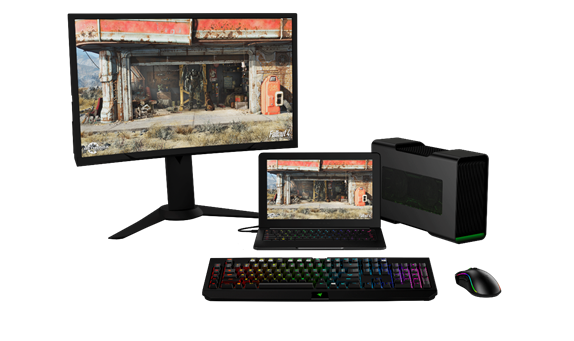 Bringing desktop-level graphics and display connectivity to a notebook is only part of this innovative solution from Razer. The Razer Core also contains four additional USB 3.0 ports and Ethernet connectivity, and it has two-zone lighting technology Powered by Razer Chroma. It is now easier than ever to transform a thin and light notebook into a complete desktop experience.