Kuala Lumpur, 20 June 2016 – Digi today announced a study released by Telenor Group’s research arm, Telenor Research, which shows Malaysians being overall digital frontrunners, leading internet communication within Telenor’s global footprint when paralleled to other nation’s young internet-users. While digital services gain strong popularity around the world, Malaysians are also influential in the daily use of mobile devices for a wide range of internet activities, from browsing to playing online games.

The Telenor Group study was carried out in Q4 2015 on a sample of 5,600 people in Malaysia, Thailand, Pakistan, Serbia, Hungary, Sweden and Norway, aged 16-35 years old, who use internet on their mobile phones – a demographic Telenor identifies as ‘Digital Frontrunners.’ The way these users apply internet on their mobiles, gives indications as to how the wider demographic in the respective countries will adopt mobile internet in the years ahead. 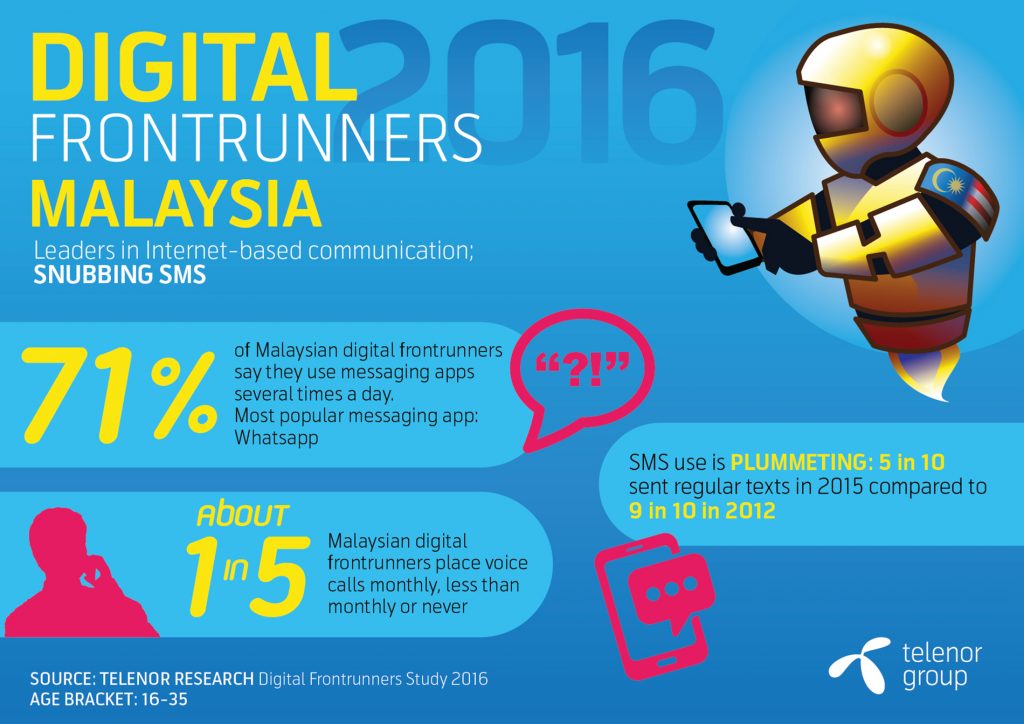 “It is crucial to have surveys like this one looking at ‘Digital Frontrunners’ who can help forecast future industry trends,” said Bjørn Taale, Head of Research, Telenor Research. “Not only is this information beneficial in planning our digital services, it is also interesting to see the resemblance between nations as diverse as Thailand, Hungary, Pakistan or Norway. Just when we think that two nations may be following the same evolution, local nuances show that we are as unique as we are similar.”

Messaging Apps Most Important in Malaysia

The survey found that a resounding 62% of respondents in Malaysia consider mobile apps the most ‘important’ communication service available to them on a mobile phone. This was in stark contrast to all other surveyed markets which consider mobile voice services to be the most important. Only 19% of Malaysian agreed voice calls to be the most essential.

For one-to-one communications on mobiles via the internet, Malaysians can’t get enough of WhatsApp with only a small 3% of those surveyed saying they use it less than once a month. However, other countries vary, with Thais opting for LINE, Pakistanis equally choosing WhatsApp, Serbians employing Viber and Swedes preferring email. Overall, Facebook remained uniformly strong across all the surveyed countries in addition to their cited top preferences.

Notwithstanding the ‘daily’ use of SMS communications services for Malaysians has dramatically declined from 88% in 2012 to 73% in 2014 and finally 49% in 2015, among those surveyed for this study. Reflecting the same pattern is the daily social media posting in Malaysia, which went from 48% in 2012, peaked at 58% in 2014 and then dropped in 2015 to 42%. Malaysians’ use of internet voice and video calls followed similar peaks in 2014, indicating the country’s frontrunners use may be linked to early adoption when new technologies first launch.

Overall, Asia leads in adoption of new mobile internet services. This is underscored by Malaysian respondents who cited some of the highest percentage of weekly usage across the surveyed markets in map services (50%) and playing games (68%).

“Given our presence across diverse regions in Asia and Europe, we need to listen to our customers and evolve alongside them. If we find that that millennial Malaysian’s cherish their messaging applications or online shopping is a passion for young Thais, then it’s our job as the leading regional digital service provider to track that and meet their needs,” concluded Taale.