Petaling Jaya, 18 August 2017 – Kaspersky Lab just launched a campaign in Asia Pacific to educate the public and spread awareness on Internet safety. Known as the Goondus Awards, the campaign is inviting submissions from the public on Internet mistakes and faux pas that have led to reputational, financial or property damage or loss for individuals.

The Goondus Awards website which features the submissions anonymously, highlights real life incidents where a naïve or ill-informed Internet practice led to some form of misfortune.

“We want to educate people about safer Internet behaviours and to showcase real world examples of missteps leading to some form of loss or damage. While some stories may be humorous and even incredulous, the repercussions and damage were real and in some cases severe,” explained Sylvia Ng, General Manager, South East Asia. “As our entries are entirely anonymous, we’re encouraging a community led campaign to drive home the message that only safe practices will make the Internet safer for users.” 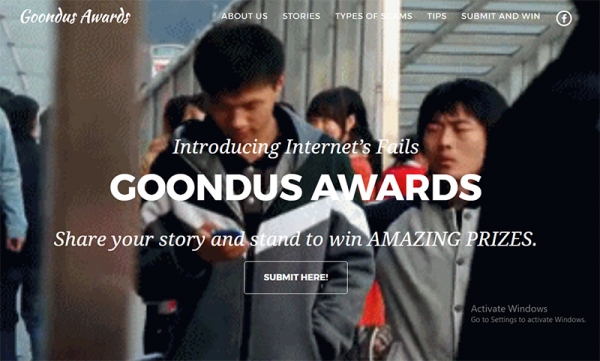 The Goondus Awards showcases a wide array of stories ranging from humorous occurrences to unintelligent acts and sad episodes involving monetary or reputational loss. The campaign acts as an initiative to raise cyber security awareness in an engaging form through the sharing of personal stories. It also serves to help web visitors foster positive and pleasant online experiences.

With the ease of access to the Internet, users have developed a sense of complacency or even a mild form of naivety in their daily digital lives, potentially lending themselves to becoming victims of cybercrime.

The Goondus Awards aim to remind users that they are not completely safe from cybercriminals and that they need to be vigilant, practice and maintain Internet etiquette to protect themselves.

Malaysians, including millennials and Gen Y professionals have also been burnt by the infamous love scams. According to a report by the Federal Commercial Crime Investigation Department (CCID) in 2016, a total of 2,497 love scam cases were reported with losses close to RM100 million. It proves that Goondus are fools for love.

The fact that identity theft can happen so close to home and lead to financial loss was very disturbing and shocking to the individuals in this example.

The criteria for the story entries are that they must be based on actual events leading to tangible or intangible losses concerning Internet use. The winning stories will be selected by a panel of judges where participants stand a chance of winning an iPad Mini or a Tablet and even monthly prizes like a Kaspersky Lab premiums hamper.

The website also includes tips and advice from cyber security experts and elaborations on the different types of scams such as Internet love sex scams, credit for sex scams and phishing scams, to further inform users.

To submit a story, fill in the requested information such as your name, email address and contact number, along with the type of scam, story title and the full story in the website. The “Tips” section of the website features articles from the Kaspersky Lab blog and are categorised based on the various issues and forms of scams highlighted in the website. This educational content serves to advise users on how to prevent such incidents from occurring.

More than 70 per cent of the incidents reported involved financial implications, including phishing, online banking fraud, credit card fraud and online scams among others. Statistics from The Royal Malaysian Police recorded 113 phishing cases resulting in total losses of RM1.91.

Comparing last year’s May and 2017’s May result in terms of cybercrime rate, is it evident that the figure has grown and especially cyber harassment case has rose over 50% according to CyberSecurity Malaysia. It is also evident that, statistics in May shows cases such as frauds, spams and malicious codes rose compared to last year.