Taipei, Taiwan, March 28, 2016 – GIGABYTE TECHNOLOGY Co. Ltd is pleased to announce that its support for Intel Thunderbolt 3 has expanded with the certification of its upcoming GIGABYTE GA-X170-EXTREME ECC motherboard. 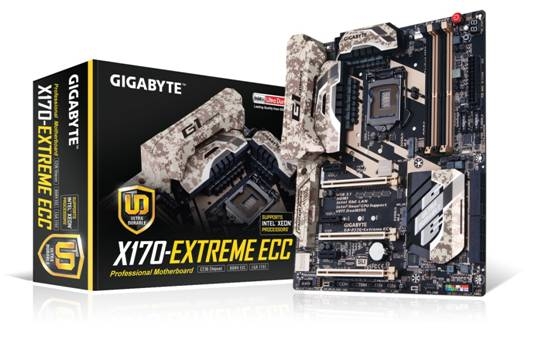 The GA-X170-EXTREME ECC is the world’s first C236 chipset board to receive Thunderbolt 3 certification from Intel, enabling full support for the fastest connectivity protocol on the planet. Compatible with Intel’s Xeon E3-1200 v5 processor and DDR4 ECC (Error-correcting code) memory, the GA-X170-EXTREME ECC motherboard has what professionals need to do their best work. The addition of Thunderbolt™ 3 makes the motherboard a definite must-have for any high-end desktop system.

Powered by Intel’s own Thunderbolt 3 controller, the new Thunderbolt 3 protocol, which is available over a USB Type-C connector on the back I/O of select GIGABYTE motherboards including the GA-X170-EXTREME ECC, brings an unprecedented single-wire bandwidth of up to 40 Gb/s — twice more than the previous generation!

Thunderbolt 3 over USB Type-C supports DisplayPort 1.2, which is able to drive a 4K resolution display at 60 FPS, and revolutionary industry-first features such as power delivery up to 36W, as well as the ability to daisy-chain up to 6 devices per USB Type-C port.

Support for Thunderbolt 3 on the GA-X170-EXTREME ECC motherboard, an industry first for the C236 chipset, means that professionals are no longer constrained by the bottleneck of bandwidth. With the ability to transfer extremely large files – such as raw 4K video – in a manner of seconds, professionals spend less time waiting and more time creating.