BBC just revealed that HUAWEI ARM business partnership has also been suspended. Find out what this new development means for HUAWEI, and consumers!

ARM instructed their employees to suspend business with HUAWEI on 16 May 2019, according to internal documents obtained by the BBC.

Specifically, they were told to halt “all active contracts, support entitlements, and any pending engagements” with HUAWEI and its subsidiaries because they were added to the US Entity List.

How Is ARM Affected By The US Entity List?

ARM is a UK-based company, owned by Japanese conglomerate Softbank, and is thus not directly subject to the HUAWEI Trump ban.

However, they said that their designs contained “US origin technology“, which would subject them to the US government restrictions. What About The Temporary Licence?

The temporary 90-day licence does not apply to ARM, because it only permits software patches and bug fixes for consumer devices, and network equipment.

What Does ARM Do For HUAWEI?

Whether your smartphone uses the Apple A11, a Qualcomm Snapdragon, or a Samsung Exynos mobile SoC – most are built around the ARM Cortex processor and/or ARM Mali graphics cores.

HUAWEI relies on ARM designs and licences for their Hisilicon Kirin mobile SoCs, like the Kirin 980 that powers their new HUAWEI P30 Pro smartphone. 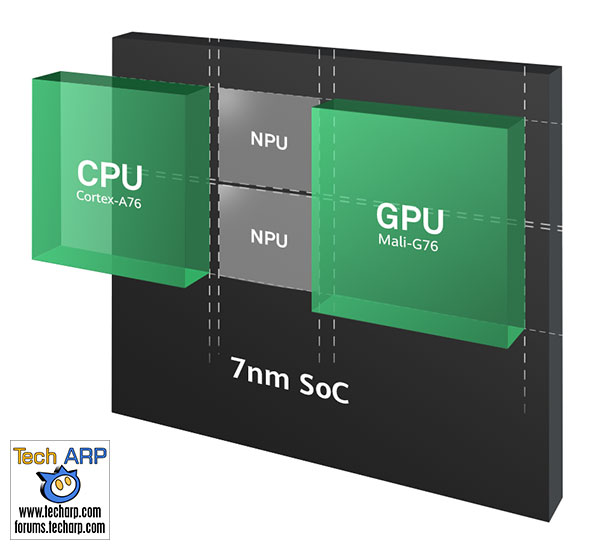 The HUAWEI ARM Business Suspension – How Bad Is This?

Short- to Medium-Term : No Real Damage To HUAWEI

In the short- to medium-term, the damage is more perception than substance.

The HUAWEI ARM licences and technical support are critical for the development of future mobile and server processors.

It would take them a long time, and a lot of effort, to switch to an alternative RISC architecture, like the open-source RISC-V.

Their best bet would be to temporarily suspend or slow down the development of their next-generation ARM-based designs, while the US and Chinese government “duke it out”…

How Will This Work Out?

President Donald Trump has framed HUAWEI as a national security threat, but the HUAWEI Trump ban is really about the trade war with China.

In fact, HUAWEI does not even sell their smartphones or laptops in the United States, which begs the question – why on earth were they even targeted?

In all likelihood, Trump is hoping that tightening the noose around HUAWEI will force Chinese President Xi Jinping into a trade deal.

We believe this ban will eventually resolve in a US-Chinese trade deal of some sort… The alternative – open conflict – would, frankly, be quite unthinkable.

Tags:ARMBusinessCorporateDonald TrumpEconomyEnterpriseHuaweiRISCRISC-VSoCSystem on a ChipXi Jinping
Previous : The Sims 4 – Find Out How To Get A FREE Copy!
Next : Xiaomi Redmi Note 7 Review : 48MP Photography At A Steal!