Antivaxxers are still creating and spreading fake death claims about Tiffany Dover, while hounding her family and her!

Find out what’s going on, and what YOU can do to help Tiffany Dover and her family!

Tiffany Dover : Who Is She? What’s Going On?

Here’s a quick primer for those who have not heard of Tiffany Dover, or what has energised anti-vaccination groups recently.

On 17 December 2020, Tiffany Dover fainted on live TV after getting her Pfizer-BioNTech COVID-19 vaccine, due to vasovagal syncope – a very common condition.

She recovered within minutes, and explained that it wasn’t a surprise because she often faints when she feels pain.

However, antivaxxers pounced on the incident as evidence that the Pfizer BNT162b2 vaccine is dangerous, sharing edited versions of the video to sow fear, doubt and uncertainty about the vaccine. 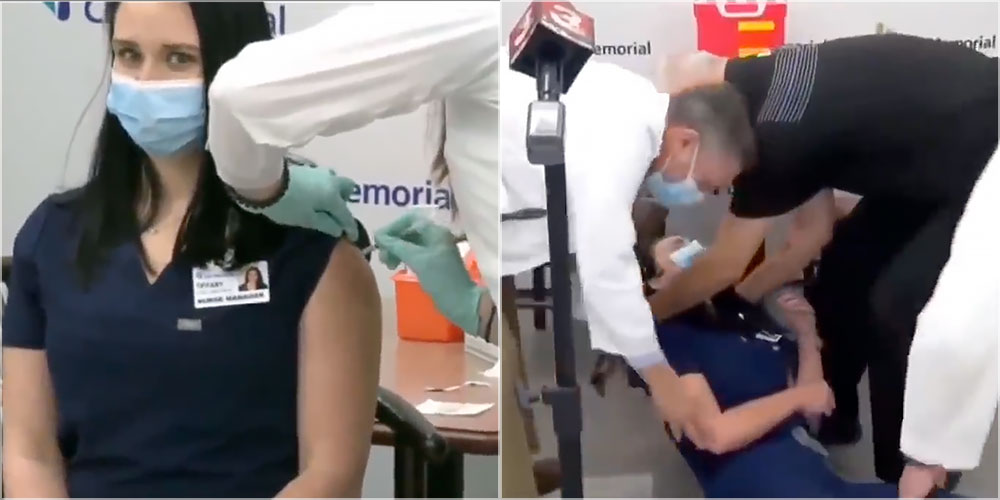 After her fainting episode was explained and the full video was shared, antivaxxers had to switch gears.

They decided to claim that Tiffany Dover later DIED, after recovering from her fainting spell.

It looks like rumors of Tiffany Dover’s death are TRUE and it is being covered up.

No activity since her highly publicized public vaccination despite regular use of Instagram. No replies to dozens of questions. Family set their profiles to private.

I saw that fainting nurse died, so I checked it out!
This death record has to be her! Same town, age, and most importantly, the family listed all show up as her friends on fb!

There is reports Tiffany Dover is dead. She is the nurse who collapsed on live television when being interviewed about the vaccine. We can’t confirm it, we are trying to collect as much intel as possible.
INTEL WE KNOW

– She is from Tennessee
– She collapsed 15+ minutes after taking the Pfizer vaccine on live television
– Her Instagram account is tiffany_dover_ and she hasn’t posted for 5 days, she generally posts every 2-3 days
– There is social media posts about her death from people who were allegedly connected to her or her family
– There is reports of death threats against her family for sharing the info
– There is reports of censorship
– The debunkers are saying it is all false but are providing very little evidence

She will always be remembered for her bravery. She was a wonderful nurse. #nurse #bravery #covid_19 #tiffanydover #inmemoryof #hospital #alwaysremember

It gained 1650 followers before Instagram finally shut it down. While it was up, antivaxxers used it to promote the claim that she truly did die after being vaccinated with the Pfizer-BioNTech COVID-19 vaccine. 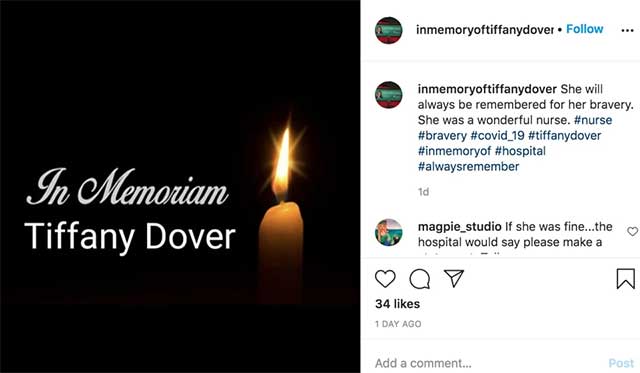 How To Help Tiffany Dover With These Fake Death Claims

Creating and sharing fake death claims about Tiffany Dover isn’t about “having an open mind” or “just investigating the truth” or “exploring the possibilities“.

This is literally cyberbullying!

And it doesn’t even stop with fake death claims. People are also hounding her family and friends, calling them fake or crisis actors.

Help stop this cyberbullying of Tiffany Dover, her family and her friends, by :

Why Tiffany Dover Death Claims Are ALL FAKE!

According to the NewsChannel 9 ABC crew who recorded the whole event on 17 December 2020, Tiffany Dover quickly recovered, and within minutes, was able to get up and speak with them again.

While antivaxxers are claiming that she subsequently died, those are complete lies. She did NOT die.

Her hospital – CHI Memorial – posted this tweet two days later, confirming that she is well, asking that people give her and her family privacy.

UPDATE: Nurse Tiffany Dover appreciates the concern shown for her. She is home and doing well. She asks for privacy for her and her family.

On 21 December 2020, CHI Memorial followed up with a short video showing that she is alive and well, surrounded by her colleagues.

To prove that it was not filmed before her vaccination and alleged “death”, they held up banners that said, “Nursing Leadership Vaccinated Together, #CHIMemorialStrong” and the date “12-21-20“. 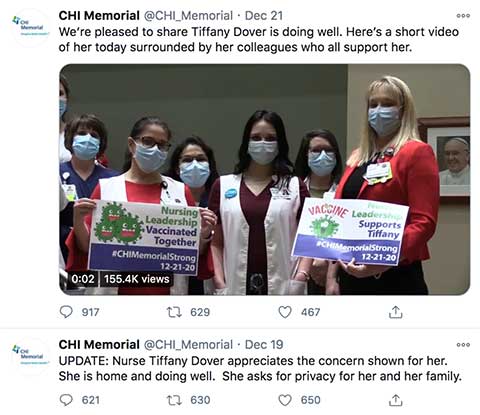 Many searched Tiffany Dover in the wrong state, because they thought she was a nurse in Alabama. Is it any wonder she got the wrong death record?

Some even assumed that SearchQuarry lists only dead people. It’s actually a search engine for public records in the United States.

With such amazing keyboard investigators, who needs the FBI? 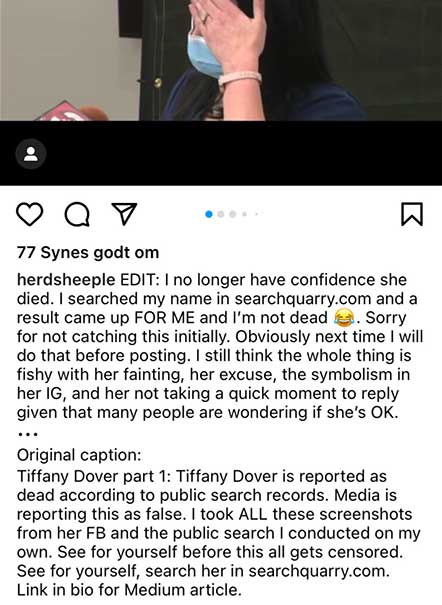 Fact #4 : Tiffany Dover Is Not A Unique Name

As unique as Tiffany Dover surely is as a person, her name isn’t unique.

In the entire US, there are currently 47 Tiffany Dovers, with nine of them in Tennessee. And no, they are NOT CLONES, as some people are alleging.

And they do not include Tiffany Dovers who have actually passed away years or even decades ago.

Fact #5 : People Are Not Obligated To Be Active On Social Media

Skeptics like Shannon Haas claim that she must be dead because “she hasn’t posted for 5 days” even though “she generally posts every 2-3 days“.

First of all, NO ONE is obligated to post anything on social media, much less maintain their activity level.

Secondly, a lack of updates does NOT mean she is dead. Some of us actually have lives, like a real social life outside of social media?

Let’s not forget that she’s a nurse manager in CHI Memorial, which is not only actively treating COVID-19 patients, they are also working to administer the Pfizer COVID-19 vaccine.

So is it really that surprising if she has been too busy to update your stalkers with her latest selfies?

But since you are so “concerned” about her well-being, here’s a photo of Tiffany Dover with her CHI Memorial colleagues on 21 December 2020 : 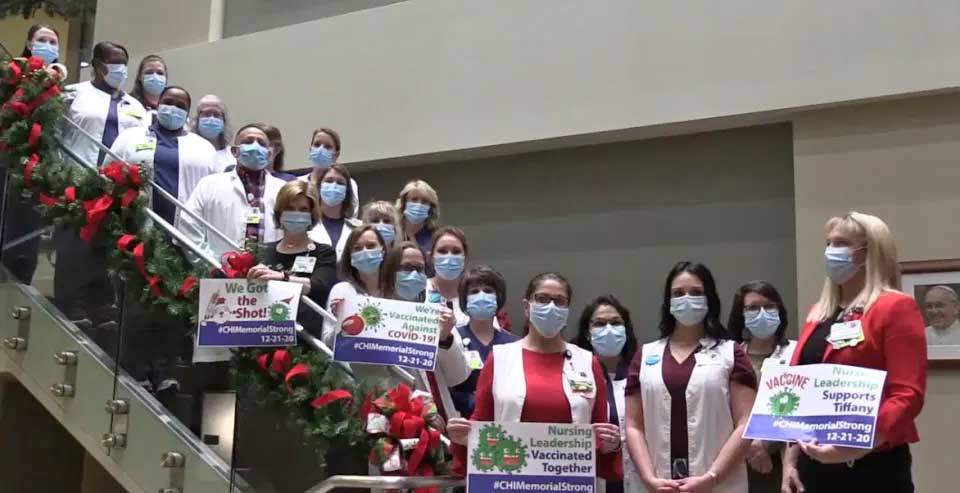 Fact #6 : Claims Of Reports Are Just Claims, Not Actual Evidence

People like Shannon Haas, Joe Leonard and Kitty Lynn are not true skeptics. They are just too damn lazy to go beyond making unverified claims on social media.

He claimed that there are “reports of death threats against her family for sharing the info” and “reports of censorship“.

But when a friend asked for links for those reports, he could only reply, “Not sure.” I kid you not.

Yet, he had no qualms claiming too that “debunkers are saying it is all false but are providing very little evidence“.

If you see claims like that, WITHOUT EVIDENCE, please treat it the same way you would if someone told you he/she can fly without wings.

With the utmost skepticism : Yeah, sure, bro… sure… preferably with a middle finger.