You have probably seen the Spot The Difference post criticising Rev. Patrick Mahoney on his hypocrisy on the Hong Kong and George Floyd protests.

Find out if it’s true that Patrick Mahoney posted those tweets on the Hong Kong and George Floyd protests!

Note : The original post lacks the two MISLEADING warnings, which we added to avoid further abuse.

Here is our short TLDR summary for those who just want to know the facts :

Patrick Mahoney is just a self-aggrandising Christian pastor with a history of publicity stunts – a nobody.

Unfortunately, his two tweets are being misused by Chinese and pro-Chinese netizens (and bots) to spread the narrative of American hypocrisy.

Ironically, this misleading Spot The Difference post is being shared on Twitter, Facebook and WhatsApp – platforms which are banned in China. That is really the true hypocrisy of this storm in a teacup.

And for those who want to know more, here are the facts :

Reverend Patrick Mahoney sure posted those two tweets, on the same day – May 28, 2020.

As his actual tweet on the Hong Kong protest above shows – he did not actually sanction violence.

In fact, his actual tweet on the George Floyd protest in Minneapolis could be referring to violence by both the police and the protestors.

We would rate his posts as partly hypocritical, because he wasn’t against the George Floyd protests, just against the violence.

The Spot The Difference post creator intentionally replaced the picture Patrick Mahoney posted with this Getty photo that Lam Yik Fei took on the night of 9 February 2016. 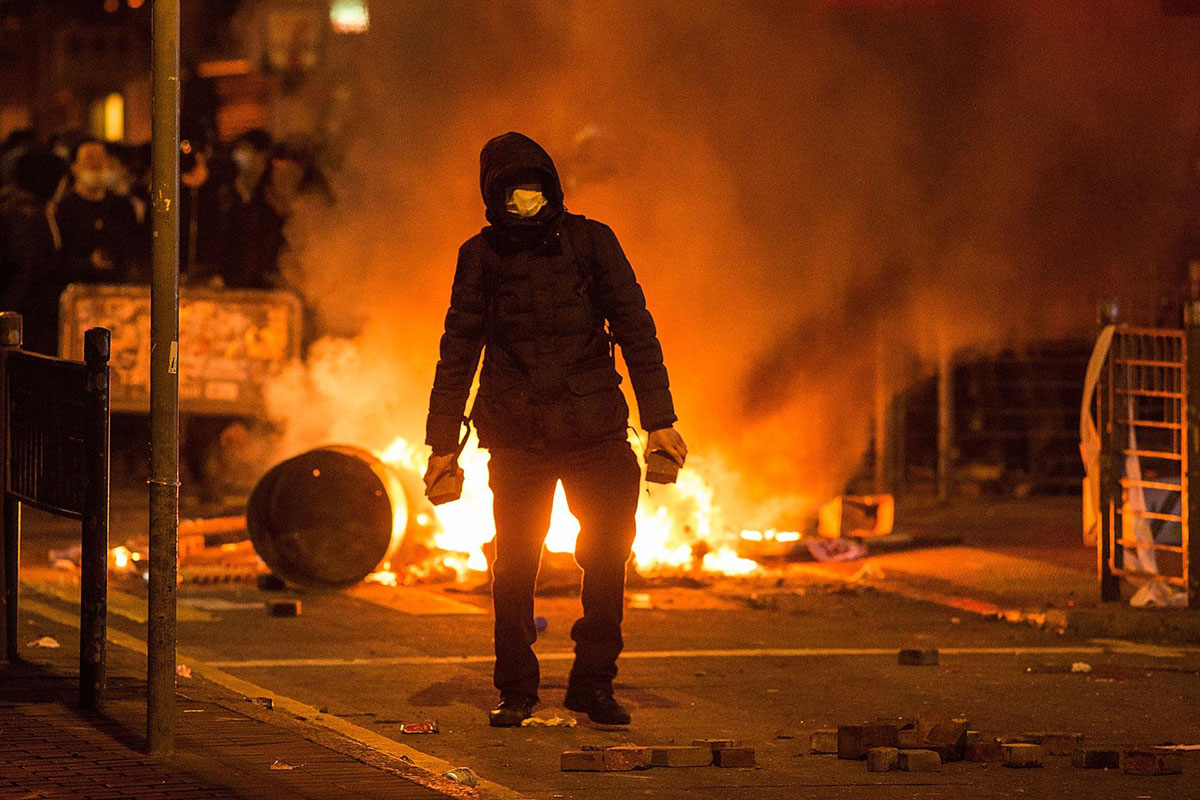 Discounting the violence, both Hong Kong and George Floyd protests started because of injustice. In both cases, the people are demanding change.

The people in Hong Kong have been protesting for years over the systematic erosion of their Basic Rights and freedoms.

The most recent May 2020 protest was triggered by the proposal of new national security laws that would allow Chinese security forces to operate within Hong Kong.

In the United States, it was the racism that black Americans have endured, triggered by the death of George Floyd after a white police officer kneeled on his neck for almost 9 minutes. Fact #5 : Protests Are Allowed In The US And Hong Kong

The First Amendment of the United States Constitution specifically gives all American citizens have the right to assemble and demonstrate peacefully :

Congress shall make no law … abiding … the right of the people peaceably to assemble, and to petition the Government for a redress of grievances.

Unlike China, Hong Kong citizens have the right to peacefully assemble and protest under Article 27 of the Basic Law, and Article 17 of the Bill of Rights.

The right of peaceful assembly shall be recognised. No restrictions may be placed on the exercise of this right other than those imposed in conformity with the law and which are necessary in a democratic society in the interests of national security or public safety, public order, the protection of public health or morals or the protection of the rights and freedoms of others.

Fact #6 : Patrick Mahoney Is Not The American Government / People

Patrick Mahoney is a self-aggrandising Christian pastor with a history of publicity stunts. But in the grand scheme of things – he is nobody.

He is not a representative of the American people, or the American government. Yet, his two tweets are being misused by Chinese and pro-Chinese netizens (and bots) to spread the narrative of American hypocrisy.

Ironically, this misleading Spot The Difference post is being shared on Twitter, Facebook and WhatsApp – platforms which are banned in China. That is really the true hypocrisy of this storm in a teacup.