Even after it was exposed to be fake, the CARES Act video by High Impact Vlogs continues to be shared and circulated on WhatsApp, as evidence of a plot by governments to take greater control using COVID-19.

It is now obvious that the creator, Brian Young, is intentionally leaving it up there to gain views. And so, it is our responsibility to expose him for what he is – a creator of fake news. 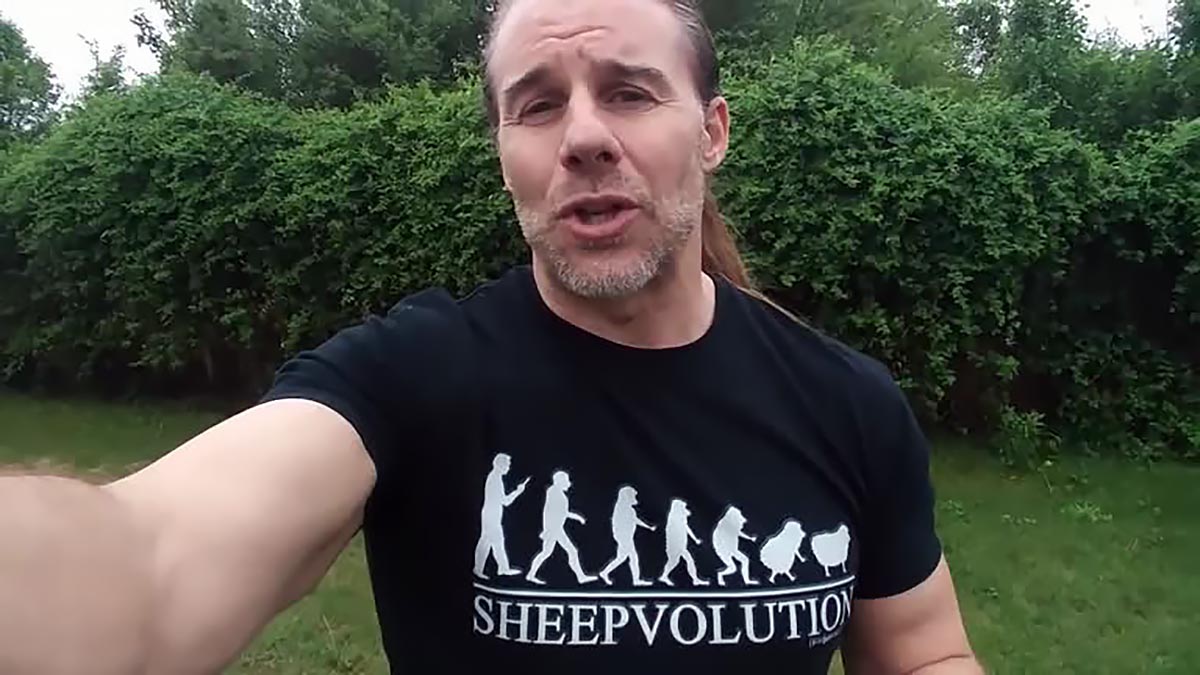 Brian Young of High Impact Vlogs posted a video on YouTube to prove that COVID-19 was a plandemic to let governments gain tighter control of their sheeple citizens.

It was based on a simple “misunderstanding” of the CARES (Coronavirus Aid, Relief and Economic Security) Act.

We won’t share that video with you because it’s full of lies, but here is a “high impact” screenshot from his video, which summarises his “evidence” of the COVID-19 plandemic. But even after he realised that he was wrong, Brian refused to take down his video, claiming that he wanted it to serve as an “example” of how he got it wrong.

He simply changed the title to “I GOT THIS WAY WRONG GUYS…PLEASE…READ the PINNED COMMENT” and posted a pinned comment that claims he got a huge part of the video wrong. He got it ALL wrong, for the record. 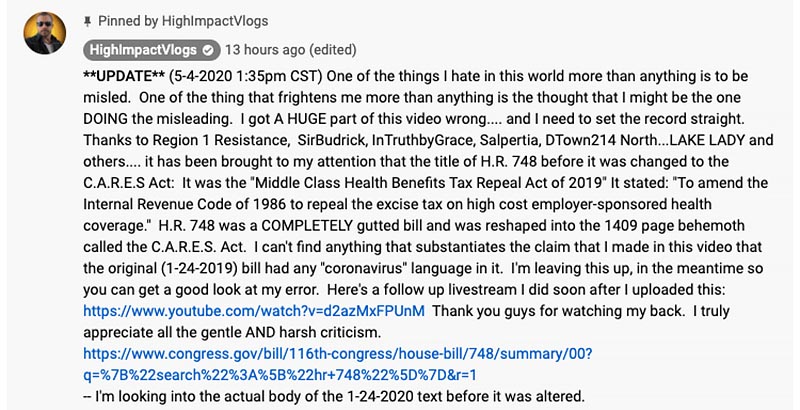 And it didn’t stop him from pitching to everyone to still support his cause.

However, his excuse for not taking down his fake video is facetious for two reasons :

He continues to rake in thousands of views for that debunked video, which should have earned him a strike by YouTube. Even though the title has been changed, people do not seem to notice it. Possibly because the video is being shared with adoring comments like :

美国政府未卜先知。
The US government has no known prophet.

Must watch this video. It shows that based on public documents…. etc, US goverment came out with an act to tackle Corona Virus way back in January 2019!!!

OMG 😲! This is probably, the most damaging vid of the year, for the US of A!

Guess when the bill for the Act was TABLED in Congress? 24th January 2019!!! These bastards introduced the Bill in the House more than ONE YEAR AGO on 24/1/19!

Typically, Bills take more than a year to wind its way through Congress before it is finally passed into law and becomes an Act!

See the Congressional Records in the pix below. It shows the progress of the Bill, as it moves its way through the House Ways and Means Committee, all the way up to Debate in the House on 17/7/19, and after being passed in the House, continue winding it’s way up to the Senate for ratification before finally ending up on Trump’s desk for signing on 26/3/20.

Bloody Heck! The US knew in advance of the pandemic in 2019! That dumbass, Trump, may not know the details in 2019, but for sure CONGRESS KNEW!

So the coronavirus in Wuhan was bio-warfare and Trump was so confident that there’d be no problems in the US, because he must have been advised that the US was prepared, or that the US strain of the virus was mild, but it turned out to be false. In all likelihood, the Democrats wanted a full-blown crisis, as an excuse to topple the Trump.(Trump was so confident, he’d advised Americans not to wear masks)

So now, after the debacle, they have to resort to anti-China bashing, to divert attention! Who would ever guess that these politician-bastards in the US of A, can be soooo dastardly?

Meanwhile, High Impact Vlogs continues to rake in the views, and presumably – money and likes.

It sadly demonstrates that even bad publicity is publicity… so we doubt this kerfuffle will stop Brian from coming up with more BS videos.

The money is just too sweet…

Conspiracy crackpots like Brian Young are usually very eloquent, but they are invariably wrong because they have no qualms lying, and often see causation where there is only correlation.

Please do your part to stop the creation and spread of fake news.

STOP sharing their videos and articles.

Tags:CoronavirusCOVID-19DebunkingFactFact CheckFakeHoaxScienceVirusYouTube
Previous : Evil Genius : Get It FREE For A Limited Time!
Next : Articles & Reviews From Our Friends (7 May 2020)