The Reaper’s Due DLC for Crusader Kings II is now FREE for a limited time! Get it now, and make sure you tell your friends!

If you miss this great freebie, well, next time join the Tech ARP Facebook page to get these updates quickly! 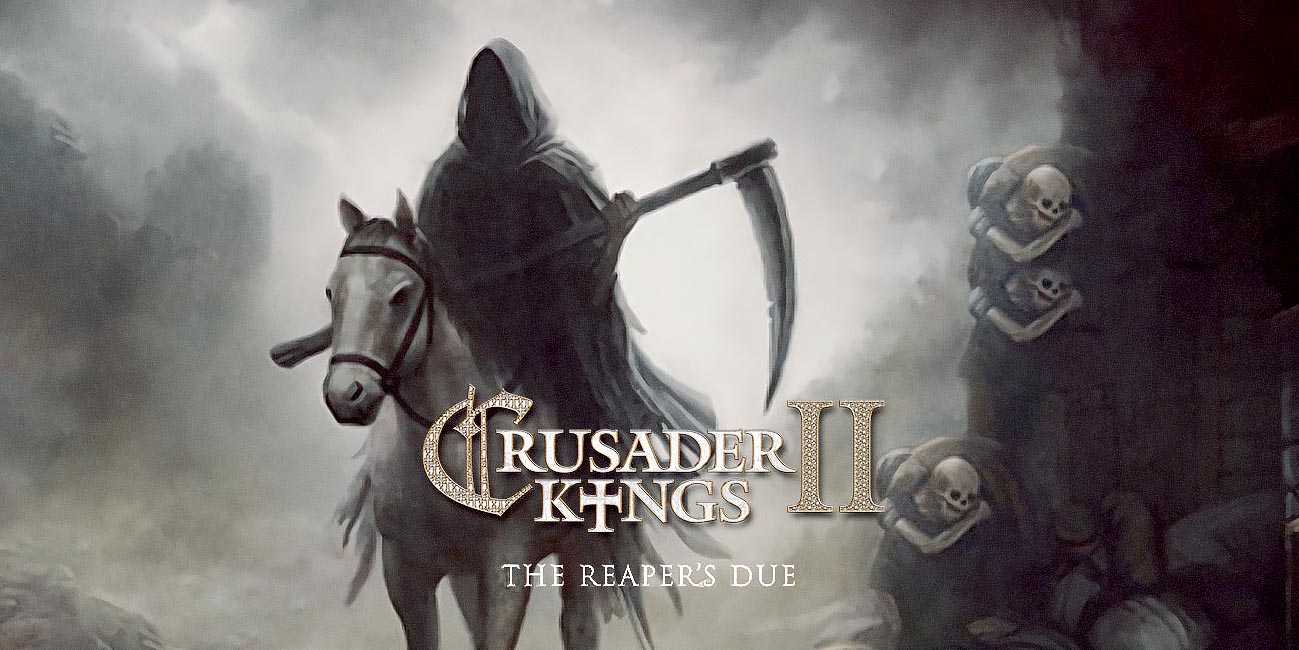 Paradox Interactive announced in October 2019 that Monarch’s Journey, the base game of Crusader Kings II is Free To Play forever!

Crusader Kings II explores one of the defining periods in world history in an experience crafted by the masters of Grand Strategy. Medieval Europe is brought to life in this epic game of knights, schemes, and thrones…

You can download and install Crusader Kings II for FREE at any time at its Steam page.

The Reaper’s Due DLC for Crusader Kings II

Little remains of those settlements where the Black Death has passed through. Hasty burials make a mockery of the sacraments and set a feast for the crows.

Once prosperous provinces have been laid waste, and the lord of the land hides away – secluded in his hilltop fortress, hoping the plague will pass him by.

Wiser princes took precautions, and didn’t waste the revenues from more prosperous years. But, in time, all must pay The Reaper’s Due.

The Reaper’s Due adds a host of new mechanics centered on the Black Death and other world shaping epidemics. Lock your gates to keep the plague from infecting your court, even if it means cutting yourself off from your suffering citizens.

Peace and good management will see your provinces reward you with greater wealth and manpower, but constant war and disease may depopulate your countryside.

The Reaper’s Due introduces many new systems and features to what is already the richest medieval tapestry in gaming:

New additions to epidemic system include this super destructive disease and a new map mode that track the expansion of deadly illnesses.

This new position for learned courtiers opens up a series of events tied to the diagnosis and treatment of diseases with medieval tech.

Slow down the spread of epidemics by investing in these outposts that care for the sick and infirm.

Watch your provinces thrive under your careful attention and degrade under the pressures of diseases run amok.

Take a page from the Masque of the Red Death and hide yourself away with your court as plagues ravage the countryside.

Crusader Kings II + The Reaper’s Due DLC : How To Get ‘Em FREE!

The Reaper’s Due DLC is FREE to download and keep, if you get it by 10 March 2020. It also requires the Crusader Kings II base game, which is now free to play.

That’s it! The DLC is now in your Steam account, and can be installed at any time!

Don’t forget to grab The Old Gods DLC, which is still FREE!

Tags:DLCFreeFree gameFree gamesFree softwareFreebieGameGamingParadox InteractivePC GamePC GamingSoftwareSteam
Previous : Cat On A Diet : Get It FREE For A Limited Time!
Next : United Airlines Offers FREE Flight Changes For A Whole Year!