Is it true that the upcoming AMD Ryzen 4000 (Zen 3) desktop processors will be fabricated on the 5nm TSMC process, instead of 7nm as announced? Let’s find out!

At CES 2020, AMD launched the Ryzen 4000 family of mobile processors, which only just kicked off after delays due to the COVID-19 pandemic.

AMD is expected to introduce the Ryzen 4000 family of desktop processors, built on a newer Zen 3 microarchitecture, later this year. 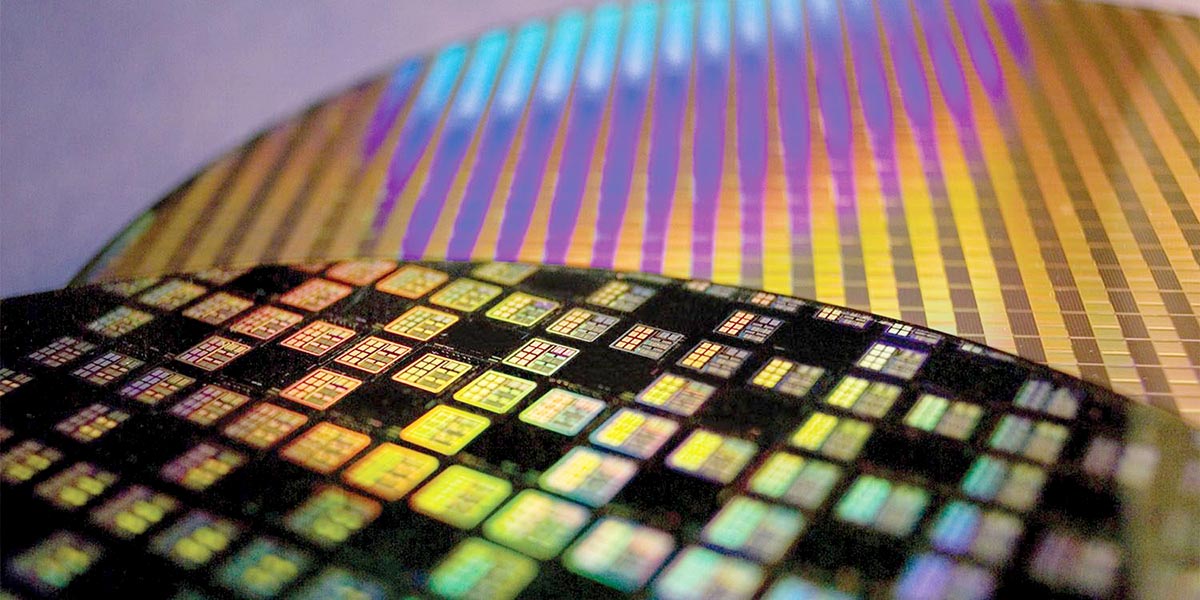 To make it easier for you to understand, we created this table to differentiate the two processor families.

A DigiTimes article, purportedly translated and posted by RetiredEngineer, claimed that the next-generation AMD Ryzen 4000 desktop processors, using the Zen 3 microarchitecture, will be fabricated on the brand-new 5nm process technology, instead of 7nm as announced earlier.

Rumor has it that AMD and TSMC have adjusted their foundry blueprints. The Ryzen 4000 series of desktop processors originally expected to launch at the end of 2020 will now use TSMC’s enhanced 5nm process (5nm Plus) instead of 7nm EUV, clearly demonstrating that AMD is now considered a tier-one customer for TSMC.

This new development confirms earlier news that TSMC, which only recently entered the 5nm era in April, is accelerating its enhanced 5nm process, bringing forward the mass production schedule to 4Q; and the enhanced 5nm Ryzen series processors will also put unprecedented pressure on Intel. Both TSMC and AMD declined to comment on rumors.

In the first quarter of 2020, AMD benefitted from the pandemic, which boosted demand due to the work-from-home economy. PC and server sales exceeded expectations; Ryzen and EPYC series processors shipments were strong, driving first quarter revenue up by 40% compared to the same period in 2019. Earnings were also better than market expectations.

Despite AMD’s conservative outlook for Q2, with revenue estimates between $1.75B and $1.95B, it is still up by 21% compared with the same period in 2019, and up 4% sequentially, still a good result despite the traditional low season for PCs and the impact of the pandemic.

As understood, AMD’s desktop and server shipments have strengthened across the board since the second half of 2019, and demand has exceeded market expectations. Even AMD themselves and TSMC were caught by surprise. This has led to significant improvements in AMD’s profitability. TSMC happily welcomes the growing strength of its chip customers.

According to sources in the semiconductor industry, AMD had announced a comprehensive partnership with TSMC for sub-7nm processes, and has also confirmed mass production schedules for 7nm, 7nm EUV, 5nm and 3nm products. However, beyond expectations, AMD’s performance took a Great Leap Forward over the last one and a half years. Board, PC and server manufacturers significantly increased their ‘weightage’ (adoption of AMD products relative to others), in part due to Intel’s chip shortages. More importantly, the partnership with TSMC resulted in drastically improved product performance and yield, as well as price competitiveness for AMD, leading to rising shipments and market share quarter after quarter.

In 2020, because of the huge increase in sales, AMD has been urgently chasing after TSMC to expedite orders. The size of those orders were not small, becoming the greatest fallback for TSMC, which got caught in the Huawei ban crisis, making demand and production planning extremely difficult. As a result, TSMC is also adjusting (broadening) its services for AMD, and in considering the optimum allocation of production capacity, modified the process plans for AMD’s products.

As understood, TSMC has entered the 5nm era since April. The enhanced version of 5nm will also enter mass production in Q4, ahead of market expectations, and the first customer to adopt it is AMD, with its new Ryzen 4000 series processors.

AMD’s new generation Ryzen 4000 series processor (codenamed Vermeer), originally planned to use 7nm EUV, will be unveiled around Sep-Oct, but in line with the mass production schedule of TSMC’s enhanced 5nm process, will only be launched at the end of the year or during CES in Jan 2021.

According to semiconductor industry players, AMD plonked down a lot of money to enter the enhanced 5nm era, hoping to build upon its success and expand its leadership in advanced process technology before Intel’s 10nm process is fully deployed and 7nm process is yet to debut, once again capitalising on the narrative around introduction of advanced process technology and performance/efficiency improvements, to narrow its market share with Intel.

Judging by AMD’s current momentum and product performance, the enhanced 5nm Ryzen series processors will put unprecedented pressure on Intel. If Intel does not cut prices or accelerate the introduction of 10nm desktop processors, its empire may be gradually eroded by AMD, ushering in the biggest change in the global PC platform competitive landscape in 15 years: AMD’s market share can be expected to reach historical highs.

Separately, Nvidia has finally joined the 7nm bandwagon recently, entering full production in the second half of the year, while 5nm capacity continues to be reserved for Apple and HiSilicon, although the status of HiSilicon’s orders after Q4 is unknown due to the heightened US ban on Huawei.

Now, we have not directly seen the DigiTimes article, so we cannot vouch for its authenticity. We only have this picture to go by : 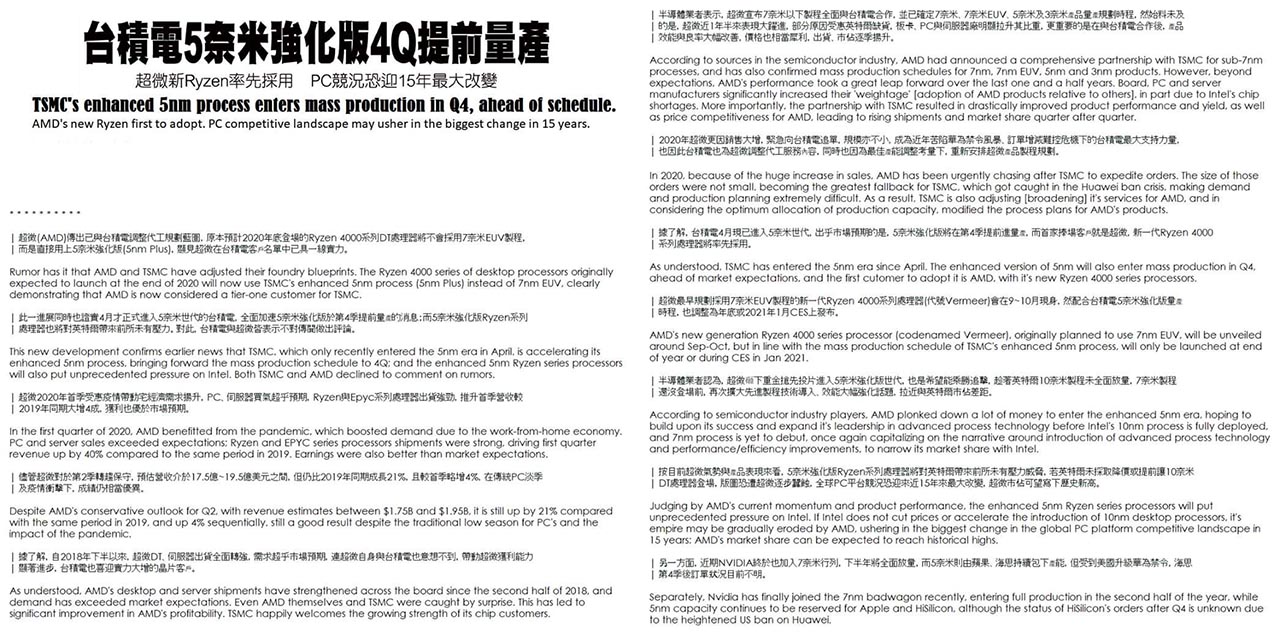 We have no idea whether the DigiTimes article exists, or was translated accurately, but we seriously doubt it will happen. Here’s why…

AMD CEO Dr. Lisa Su confirmed at CES 2020 that Zen 3 will debut in 2020, most likely around October to make it in time for the year-end holiday season.

While shrinking die size is generally a good thing, desktop processors like the upcoming 4th Gen Ryzen 4000 CPUs do not “need” a die shrink.

The focus will be on achieving high clock speeds at lower costs. That’s why the 3rd Gen Ryzen 3000 desktop processors use a chiplet design – the CPU dies are fabricated on 7nm, while the I/O die is fabricated on 12nm.

A matured and improved 7nm process would allow the 4th Gen Ryzen 4000 processors to deliver higher clock speeds at a much lower cost than a new 5nm process.

Reason #3 : Mobile Ryzen Processors Will Likely Be First To Use 5nm

AMD is strongest in the desktop and HEDT segment, outperforming Intel by sheer brute force, thanks to the higher number of cores in their desktop Ryzen and Threadripper processors.

They are weakest in the mobile market, with Intel mobile processors still controlling the vast majority of the market.

To seriously take on Intel in this critical segment, AMD would probably leverage the costly 5nm process to give their future Ryzen 5000 mobile processors a significant advantage in both performance and power consumption.

Reason #4 : 5nm Not That Advantageous Over Improved 7nm

While a 5nm transistor node sounds like it will offer 28.5% smaller transistors than a 7nm node, the difference in reality is much smaller.

That’s partly because the transistor sizes – 7nm, 5nm – are really marketing terms, not precise engineering definitions – and partly because of diminishing returns.

In other words, the net performance difference between the TSMC 5nm and improved TSMC 7nm (N7+) is just 13.6%. The cost of 5nm would, no doubt, be far more than improved 7nm.

Another thing to consider with a new transistor node is yield. This is the problem Intel had with their 10nm process technology – poor yield.

Will AMD risk the success of their 4th Gen Ryzen 4000 desktop processors on TSMC hitting reasonable yields on 5 nm? We think not!