Burgertory recently complained about how GrabFood was discriminating against them, in favour of larger businesses, or those who can pay them higher commissions.

Find out what happened to Burgertory, and why GrabFood could be manipulating what you can or cannot order, to make more money!

Burgertory vs GrabFood : A Quick Primer

Burgertory – a small gourmet burger restaurant – had been using GrabFood for food deliveries for more than a year.

However, they recently noticed that GrabFood kept listing their business as unavailable, even though they were open for business.

Oddly, other restaurants in the vicinity were listed as available, just not Burgertory. When they complained to GrabFood, they were told that restaurant availability was turned on or off based on :

In other words, what you see on GrabFood is not what’s really available, but rather – which restaurant is more willing to pay them more commission, or can generate them more money.

If you want to know more about what Burgertory posted, please scroll to the bottom of this article.

Burgertory vs GrabFood : Some Updates!

First of all, Grab issued an official press release, stressing they do not turn restaurants off based on commission rate, but there was no mention of the sales bucket.

In a Facebook comment, they said that Burgertory was switched off the first time, because a GrabFood rider arrived and found them closed.

However, Burgertory pointed out that they kept Grab updated on their operating hours, and the rider arrived late – after they closed at 8 PM, and they were not alerted to the rider’s report, or that they were being switched off.

Burgertory also posted a separate update, sharing that Grab told them other merchants “has paid campaigns with them, and the difference in the discoverability radius is to help with the campaign ROI“. 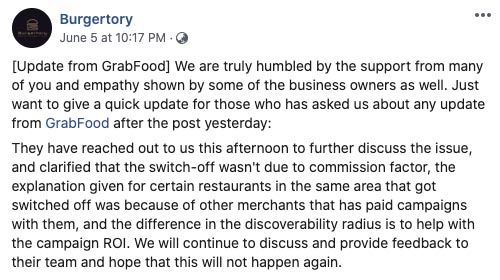 GrabFood Discrimination : Bad For Almost Everyone

If what they were told is true, then GrabFood is intentionally turning off visibility to potential customers, in favour of higher profits from their merchants.

They are no longer acting as a neutral platform, but becoming a gatekeeper of sorts, giving those who can pay more, greater access to customers.

This is naturally bad for merchants, who already have to pay rather exorbitant commission – 25% to 35%. With such a discriminatory system, they will be forced to pay more just to stay visible on their platform. 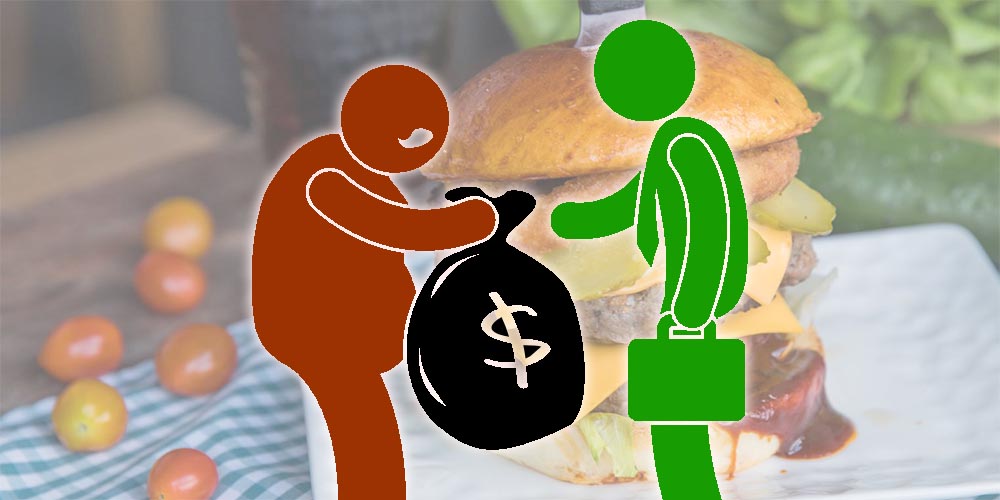 This is also bad for customers, because our choices will be limited to what GrabFood decides makes them more money, not what’s actually available.

They would be essentially deciding who you should order your food from. And limiting you, not to those with better food ratings, but those who can pay them more.

Eventually, food prices will go way up, because merchants have to increase their GrabFood commissions to “stay visible”, and the additional cost will be added to your meals.

It’s not bad for everyone though. As long as customers remain ignorant, restaurants will be “encouraged” to pay GrabFood more money. It will work out great for GrabFood.

Burgertory vs GrabFood : What Happened?

Here are the details of the Burgertory vs GrabFood scandal. It started with a Facebook post by Burgertory on 4 June 2020 :

We are really disappointed and upset with the partnership with GrabFood.

We have been on-boarded to GrabFood for more than a year now, and we have been a cooperating partner.
Not until recently that we found out GrabFood has been very non-transparent in their assignation for restaurants availability in terms of radius.

We have been receiving a lot of complaints from our customers about GrabFood not showing the availability to deliver within reasonable distance, and we thought this is due to GrabFood system that is set to be within a specific distance in each area.

However what triggered the following case was on 26 May 2020, when we were alerted by our staff that GrabFood was unavailable for that day (imagine the sales that we lost, especially during this COVID period whereby businesses are struggling). Our sales from GrabFood on that day is ZERO. Upon checking, we realized other restaurants in same area is available but not us.

Hence we reached out to GrabFood merchant support via live chat and given the response that they off our restaurant availability from the back-end due to differences in commission rate by different restaurants, which means the restaurants which signed higher commission rate with them will get the priority and ‘be available in more places’. And they switched on our availability back after our call.

We were very upset and escalated to the manager. He then gave us another explanation that GrabFood will allow restaurants with larger ‘sales bucket’ to appear in more places. If that’s the case, it’s discrimination against small businesses, or any businesses that have menu selling items with lower price.

We gave feedback to them that this is not acceptable. And the manager promised to get back to us again after discussing with the team. It’s been a week and we hear nothing from them.

Yet it happened again today..! We realized they ‘turned off’ our restaurant again after checking from the app. Hence we wrote a complaint again, and same cycle happened… (same canned response, and they switched back on)

We are deeply disappointed with such partnership relationship. Does this mean that we have to always check if our restaurant has been hidden from the platform? These occurrences have broken the trust, we don’t know when their system will discriminate against us again and only switch back on after we found out and reach out to them each time. This is totally unfair to small and medium businesses.

After the public uproar, GrabFood quickly reached out to them the very next day to “discuss the issue”.

We are truly humbled by the support from many of you and empathy shown by some of the business owners as well. Just want to give a quick update for those who has asked us about any update from GrabFood after the post yesterday:

They have reached out to us this afternoon to further discuss the issue, and clarified that the switch-off wasn’t due to commission factor, though we still don’t know the reason behind why certain restaurants in the same area are switched off unknowingly. We will continue to discuss and provide feedback to their team and hope that this will not happen again.

The reason why we decided to share the experience is to clarify what it might have impacted many of us as small & medium businesses. This is a year like no other and we empathise with all local businesses that are struggling to survive. We’re touched by some the responses we received yesterday, this is the time we strongly feel what brings Malaysians together. 🇲🇾

Apart from this, all of us from Burgertory team is really thankful for all the support to our business shown by our community, especially everyone of you, in what are the toughest of times. We always strive to sustain and provide a better F&B experience to all our customers. Hope all of us can stand strong together in unity through this tough times. Stay safe! 💪

Grab has since issued an official press release, which you can read @ GrabFood Clarifies Restaurant Availability Controversy! We also asked them some additional questions on this controversy.

Burgertory vs GrabFood : What Are Other Merchants Saying?

Here is a selection of what other merchants posted on their own experiences :

Juan Lyn : I’m currently handling a chain of restaurant online delivery support and we are also facing the very same issue with you. The same reasons given above “sales bucket” size. And our ticket size on average is already around RM50.

Voxism Lim : Happens to our outlet as well.. Exactly what happen.. The store beside is always open, where as mine is turned off (unavailable)

Alief Nurudin : My shop Meteora Cafe paid 28% commission to Grab. We NEVER appeared on the app unless you searched for us manually. We have experienced the SAME thing. Suddenly, NOT AVAILABLE. 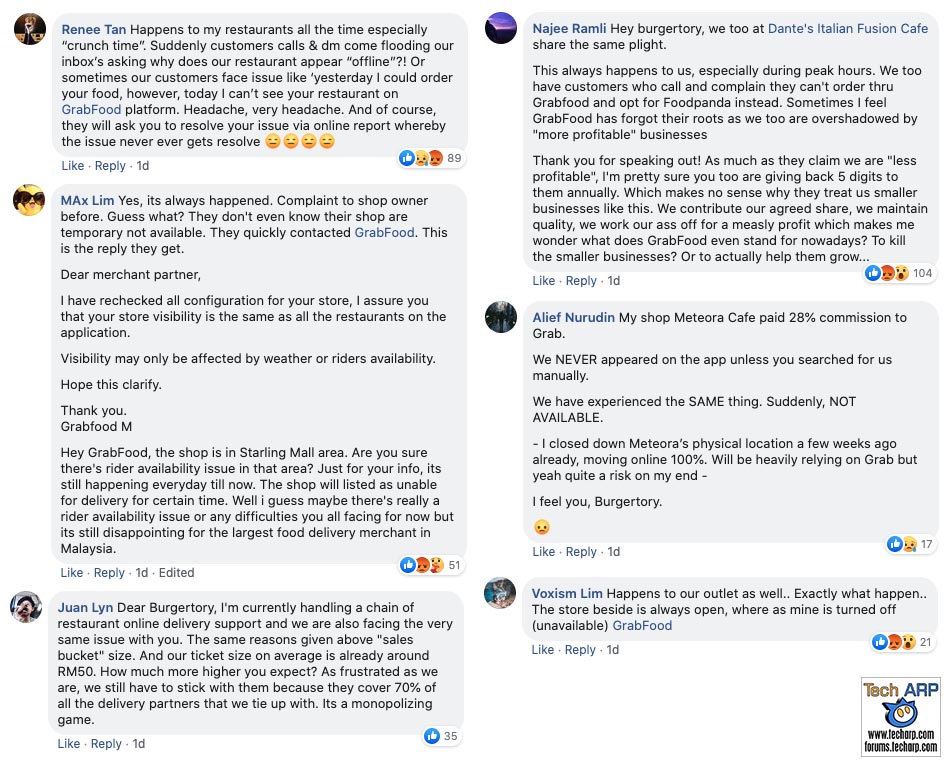 Go Back To > Business | Software | Home