Whenever Apple releases a new iPhone, it has become tradition for rabid Apple and Android fans to trade barbs in a childish display of fandom rivalry. Facebook and blogs will be replete with taunts and jeers on both sides. It was not good enough that they didn’t like the rival platform, they had to make sure the other side knew how much they hated their platform. Check out some of their work when Apple launched their new iPhone 6 and iPhone 6 Plus smartphones :

Now that Apple has officially announced the iPhone 7, there is a new comparison out : 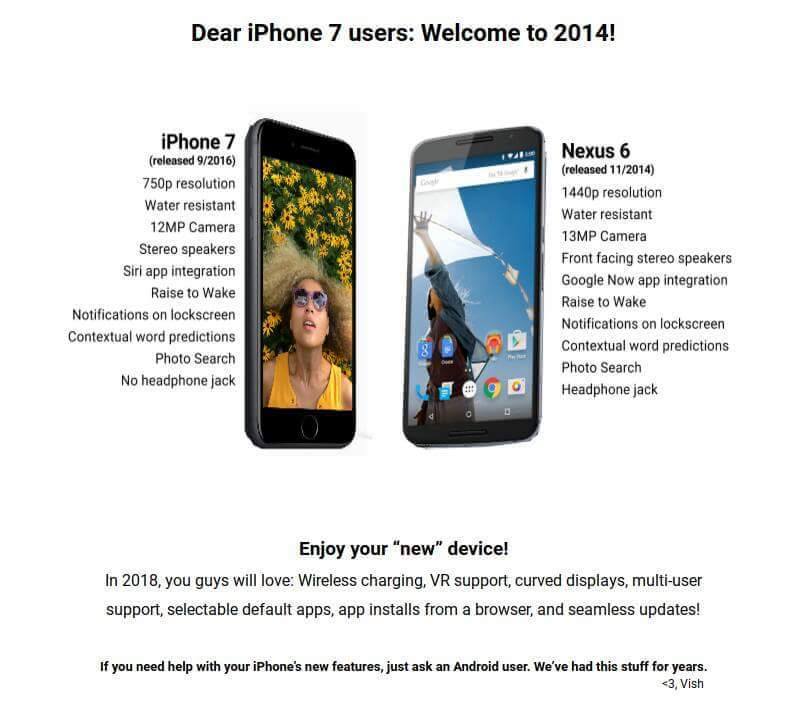 Of course, the comparison is hardly accurate, since the Nexus 6 is not water-resistant, just splash-resistant. The iPhone 7, on the other hand, has IP67-rated water resistance. It is also a fact that Apple iPhones have always lagged Android smartphones in features and specifications. In fact, Apple iPhones will always cost more… often far more, than an equivalent Android smartphone.

Updated @ 2016-09-13 : Updated the article for Apple iPhone 7, including new information on Apple iPhones and Android smartphones.

Frankly, the differences between an Apple iPhone and an Android smartphone have diminished in recent years, with both platforms borrowing features and ideas from each other. Arguing about who came up with which feature first will become nothing more than a pissing contest.

Whatever features that are unique to a particular platform will eventually be introduced in the competing platform. That’s what we want because it gives us the freedom to choose between the two platform without worrying about losing some key features we cannot do without.

Even so, one thing will remain certain – Apple will always price their iPhone models at a premium. That brings us to arguably the most vitriolic opinion that Android fans have about the Apple users – that they are all rich idiots who are getting fleeced by Apple into paying a ridiculously high price for the iPhones especially since they are using “dated” hardware or “older technology”.

Why Pay So Much For An iPhone?

Let’s take a look at the top 3 reasons why Apple users are willing to pay top dollar for their Apple iPhones.

1. It’s More Than Just A Smartphone

First of all, the Apple iPhone is more than just a smartphone. When you purchase an Apple iPhone, you are purchasing the iPhone ecosystem as well – everything from access to the 2.0 million apps (as of June 2016) in the Apple App Store to the free iMessage, FaceTime and iCloud services. Android users may argue that they have similar features but what they have is sometimes a pale shadow of what the Apple iOS platform currently offers.

For example, the Apple iPhone can automatically and continuously back itself up to iCloud since October 2011 with iOS 5. If something bad happens, the user can restore the entire contents of the iPhone using nothing more than an Internet connection. You don’t even need to use iTunes on a computer to perform this backup and/or restore process.

When we first wrote this editorial 3 years later in 2014, no Android smartphone could do that. Of course, we had no doubt even then that they would eventually implement something similar.  True enough, Android 6.0 Marshmallow introduced such an ability in October 2015 (4 years after iOS), although it only works with Android apps that “target API version 23“.

You are also buying “software assurance” in the form of iOS upgrades and updates. The recently released iOS 10, for example, was made available for the following devices, immediately and simultaneously :

Google also releases Android upgrades on a periodical basis. However, those upgrades are not made available for many Android smartphones (even if they are of the same generation), and often, they are made available long after Google releases them.

This is due to the fact that the Android platform is “highly fragmented” – there is a wide variation in hardware features and packaged software, as well as manufacturer preferences. This has resulted in significantly slower or shorter “software assurance”, especially for older or less popular models.

Google released Android 6.0 Marshmallow on October 5, 2015. It took Samsung 4 months to start releasing it for the Galaxy S6 and S6 edge smartphones. ASUS also took 4 months to start rolling out their Marshmallow update for the ZenFone 2 Laser and ZenFone Zoom smartphones. That’s actually fast, because in the past, they would take about twice as long to release a major operating system update.

When someone considers the cost of a platform, it should be done holistically because when you buy an Apple iPhone, you are really buying an experience.

The less fragmented nature of the iOS platform also makes it very easy for them to transition from one model to another. The user interface and apps work exactly the same, whether you’re using the new iPhone 7, or the much older iPhone 5.

The Android platform allows for a customisable experience, but Apple fans don’t really want that. Or at least they are willing to sacrifice that for the familiarity of a consistent user interface.

Now, let us show you exactly what they are paying so much for. The real reasons why Apple iPhones are so expensive…