Page 2 : The Odd Results Explains, Summary Of Key Points, What Does This Mean?

Robert Hallock was then asked about the odd 51% GPU utilisation result. He clarified that it was based on the single-batch (normal batch) data set, which was CPU-limited.

To clarify this, the scaling from 1->2 GPUs in the dual RX 480 test we assembled is 1.83x. The OP was looking only at the lowest draw call rates when asking about the 51%. The single batch GPU utilization is 51% (CPU-bound), medium is 71.9% utilization (less CPU-bound) and heavy batch utilization is 92.3% (not CPU-bound). All together for the entire test, there is 1.83X the performance of a single GPU in what users saw on YouTube. The mGPU subsystem of AOTS is very robust. 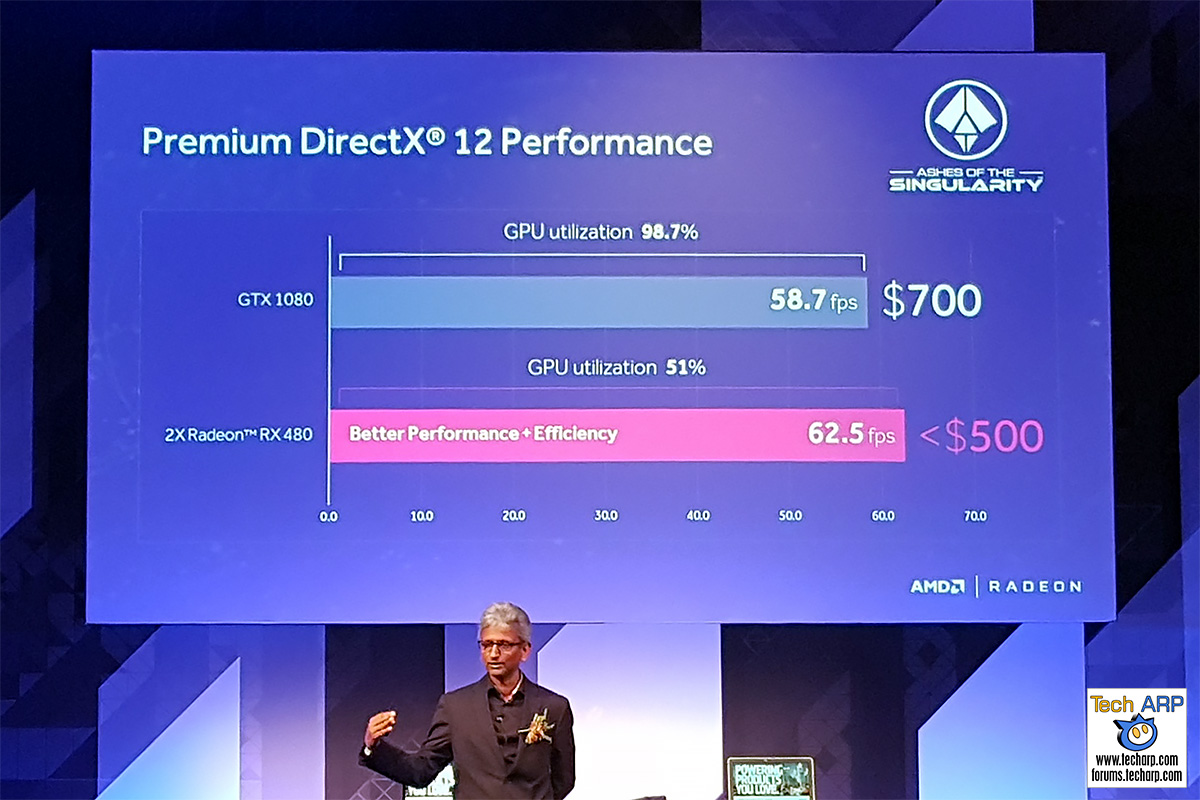 Let Us Summarise The Points…

Based on his explanation, we can derive the following conclusions :

In short, the controversy was created by AMD cherry-picking the GPU utilisation of the most CPU-limited portion of the AOTS benchmark, while comparing the average frame rate achieved in the entire AOTS benchmark.

What Does This Mean?

Despite what Raja Koduri said in the video clip, there isn’t “much, much more headroom” for developers to squeeze out of the Radeon RX 480. That 49% headroom was only seen because the test was CPU-limited.

The two Radeon RX 480 cards were literally “chilling” 49% of the time, because they were waiting for the CPU to finish processing the AI and physics, before rendering a new frame. In fact, they most likely delivered a much lower frame rate as a result of being CPU-limited. The adjusted results are still impressive, because it shows that there is still some headroom. Just not as much as was presented. We have no idea why they needed to cherry-pick that result, since the Radeon RX 480 will still impress gamers from the performance/cost point of view.

Based on our extrapolation of their comments, we can guesstimate that a single AMD Radeon RX 480 graphics card will deliver an average frame rate of 34 fps in the Ashes of the Singularity benchmark. That means the NVIDIA GeForce GTX 1080 Founders Edition [Amazon] is about 72.6% faster than the Radeon RX 480.